I went out to the park and walked early, before it got too hot. We are having temperatures in the high 90s-low 100s this week. I don't mind the heat too much as long as I can get back in by early afternoon before it gets really warm.

There were lots of picnics being set up in the park. Big church picnics hosted by a couple of the megachurches in the area. Apparently Memorial Day is a big day for church picnics. I was glad to see the American Legion out there too, setting up for a commemoration later in the day.

I thought about my Uncle John, the oldest brother of my father. He was in the Navy, and went to Vietnam in the mid 60s as an advisor. I remember he came to visit us in California before he went for survival training. I really only saw him a few times. He made it back from Vietnam in one piece, and was given command of a destroyer--the USS O'Banion. Shortly thereafter he was diagnosed with some sort of cancer and died at the age of 48. His daughter told me that he had been exposed to Agent Orange during the war. He is buried at Arlington. My dad is 88 and their other brother just turned 90. I wish he could have become an old man like them.

Like yesterday, I went out early today to avoid the heat and walked for a couple of hours. Once it got too hot, I drove around looking at things. I found a water bottle in one of the cabinets, which is somewhat insulated, and I put some ice water in there and it stayed cold for hours. Very refreshing.

I ended up in the vicinity of the former Mather AFB, out east of where I live. The base was closed years ago during realignment, and is now mostly residential neighborhoods, an industrial airport where shipping companies such as UPS fly in and out of, and some park land. It first opened during WWI as a flight training school. 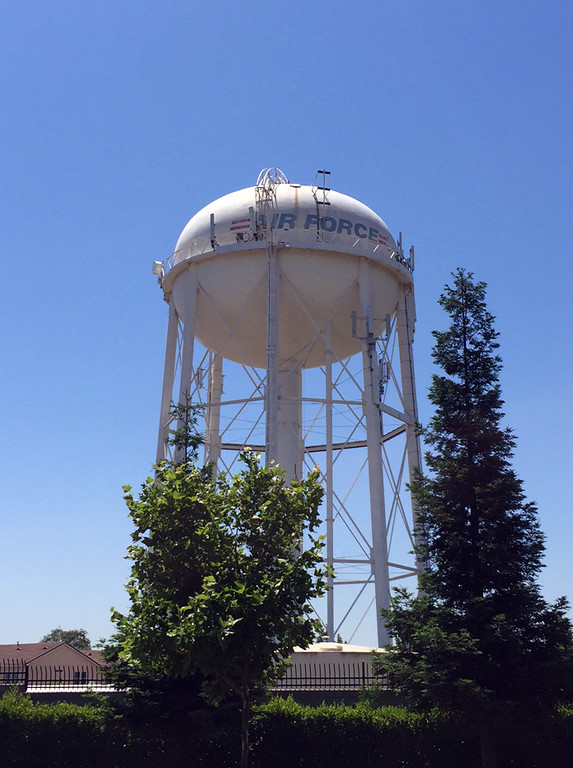 The old water tower from the AFB. I was in the Air Force, so always like to come across stuff like this.

Later, I headed up into the foothills to have some lunch in a restaurant that I had tried about 3 years ago and really liked. I took Malida up there about a year and a half ago, but the restaurant was closed on Tuesdays. I forgot about the closed on Tuesday thing, and it was closed again today, since it is Tuesday. I thought about wandering around the town, but it was already close to 100 degrees, so I drove back down and got some fish and chips, and ate at home in my nice air-conditioned home.

I came across this on the way home at a place that makes cast aluminum sculptures. It kind of made my day. I love wandering aimlessly.
Collapse