I missed my "in bed by midnight" by 7 minutes last night (or this morning, I guess), and my "get up by 8" by 18 minutes, but I got a good night's sleep and was out of the house by 9 to go walking and go vote. It was a nice morning, and didn't feel like it was going to get real hot. I walked for about an hour then walked over to my polling place and cast my vote. I have voted in every election, except one, since I was eligible to vote. I consider it a privilege.

The turnout was light this morning. Only about 60 people had voted when I got there at about 10. While I was there I dropped off Malida's mail-in ballot. She had to work today. This was her first chance to vote as a US citizen, and she was excited to be able to vote for the presidential nominee.

After I voted, I took a drive out to the country for a while. My plan was to explore for the balance of the morning, then come back in the afternoon and prepare for my phone conference with my doctoral advisor tomorrow morning. She sent me an email asking to reschedule to Friday, so I rescheduled my preparation until Thursday. 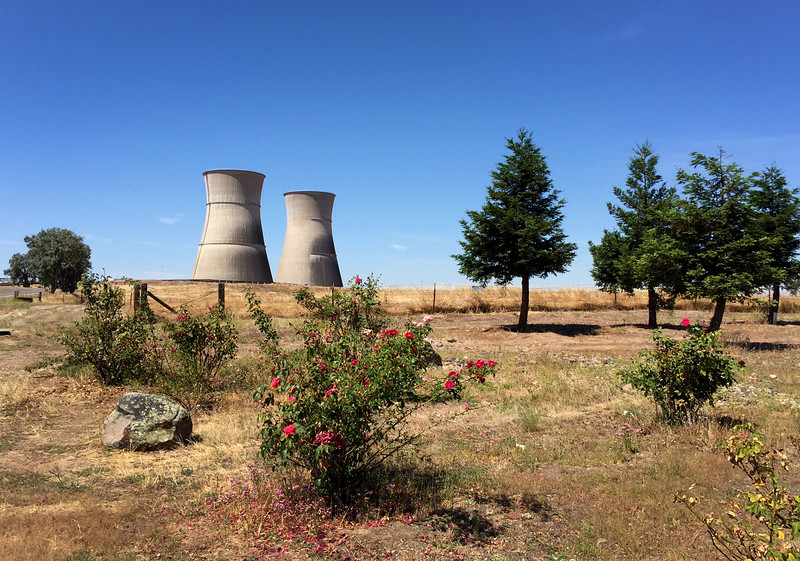 I went out to Rancho Seco park. It used to be the nuclear power plant for the area, but was decommissioned a number of years ago, and is now a regional park with two giant cooling towers, surrounded by vineyards. There is a portal there, and I had big plans to capture it, then make some links. I did capture it, but one of my nemeses anticipated my actions and threw up a link to block me. "I can read your mind" she said in the chat function. There is a lot of strategy to the game, and I learn something from almost every encounter. I now know that my movements can be tracked. I love that the game is both physically and intellectually challenging. Kind of like walking chess.

During one of my walks today I noticed something hanging from a fence along one of the baseball diamonds. It was a crocheted heart, with a little message attached. The messaged indicated that I could take it, so I did. When I got home I looked at the Tumblr page to see what it was about. I expected some sort of "gotcha", but was pleasantly surprised that it is just someone out there spreading a little love in the world. It made my day.