Today was Costco day. I go to Costco when we are out of toilet paper and toothpaste. Those are the key indicators of when it is time to go. Lesser indicators include bar soap, Kleenex, and discount Korea BBQ gift cards (a $200 value for only $149!). My Costco goal is to get only what is on the list and spend less than $200, not counting the Korea BBQ cards. I never do it.

Malida expressed an interest in going with me today. She is going to Thailand in October, and has a list of things she wants to take with her. Vitamins for her mom, chocolate for friends, etc. So she came along.

I don't really care for giant stores, but I don't mind Costco too much, as long as I get there early before all the free sample people set up. Once they start passing out samples it is absolute chaos. People block the aisles with their giant carts to taste some cheddar goldfish or something. I never try anything there. I get what I need and get out.

We got there early and managed to stick to the list for about the first 4 aisles. We were walking down the kitchen stuff aisle and Malida mentioned that we needed some new kitchen knives. Her friend Apinya showed her a really sharp knife that cut right through a pineapple, and that's what she wanted. The words were barely out of her mouth when we turned the corner and ran right into a woman displaying knives--the same kind her friend had showed her.

Our other unexpected purchase was an area rug to put in our living room. They were on sale, and we found one that met our needs. It wasn't completely unexpected, since we had planned to get one after we put in the tile floors, but I wasn't expecting to buy it today. The price was right, though, and came with a $50 instant rebate.

So yeah, way more than $200. After we shopped we went to the Korea BBQ and had lunch. It's all good. 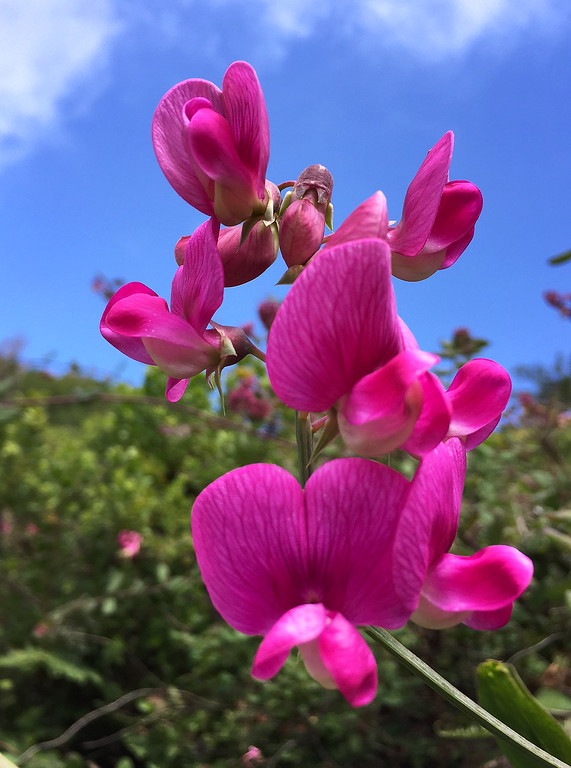 Some flowers on the trail at Point Reyes. Not sure what they are, but they remind me of orchids a bit.
Collapse