It was a great weekend. Friday we met up with our friends and had a lovely dinner at a seafood place on the river. Last time we were there was for our 1st anniversary. It's been a while. It was a beautiful evening--about 80 degrees where we were sitting outside. After the dinner we went to an outdoor concert to see Jackie Greene, who grew up in Sacramento, and played an amazing show.

I always enjoy seeing him perform. He is so talented. He left Sacramento a number of years ago to make it big, and never did, but is very well respected in the music industry and has played with everyone.

We went for a walk along the creek today. It was beautiful morning and the turtles were out in force. After we walked we went to our favorite noodle place for lunch. We go there about every other week, and they can pretty much guess what we want. The place is owned by three brothers, and there are two fairly young servers who do most of the work.

The last time we were there one of the servers, Sarah, noted that I now had a beard. I told her I was off for the summer and didn't have to shave. She asked what I did, and when I told her I taught at the college, she exclaimed, "YOU'RE A PROFESSOR?"

Turns out they are both students at the school. They were pretty impressed that I taught there. Today, when we came in, they both said, "Hello Professor!" lol. I had the usual: 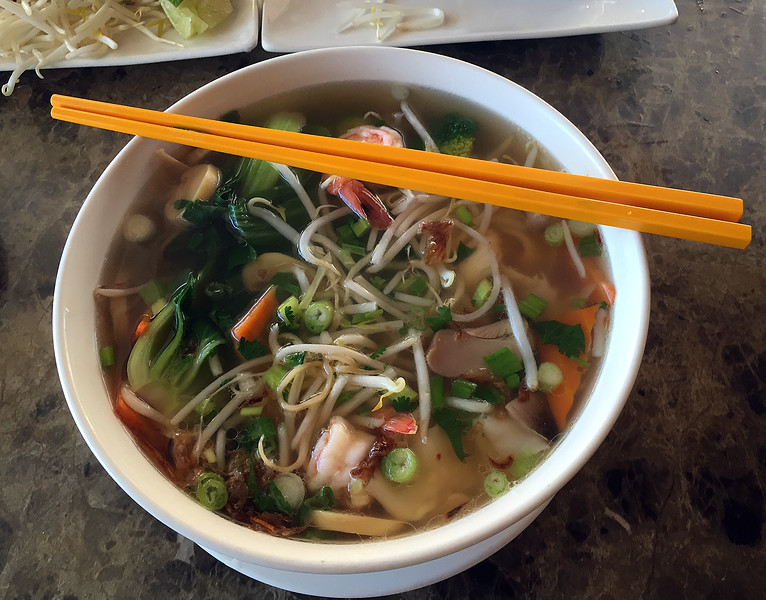 I will go in to work tomorrow to get the next semester ready, then go to the dentist for my 6-month. I have had the same hygienist for close to 25 years. We went to school together. When they called to confirm my appointment, the office manager noted that I would be seeing a new hygienist--Daisy. Not sure what's up with that, but I will find out, I guess.