We got up at about 1:30 this morning and laid out on the deck of the cabin to watch the meteor shower. It was pretty impressive--some of the brightest and largest I have ever seen. We stayed out for about an hour, then started falling asleep and went in.

We checked out of the cabin this morning and went over to Pinecrest Lake to hike around a bit. We ran into a couple of park service guys who wanted to know if we had seen an injured bald eagle. We hadn't, but eventually came across it down the trail. The park service guys were already there, and had called in people who would know what to do with an injured eagle.

Some woman in a bathing suit came up and told me she thought it was a young bald eagle, because the head hadn't turned white yet. "Probably just out of the nest," she added. I looked up juvenile bald eagles, and this one looks to be maybe between 1-2 years old. I am not an eagle expert, though, "he added". 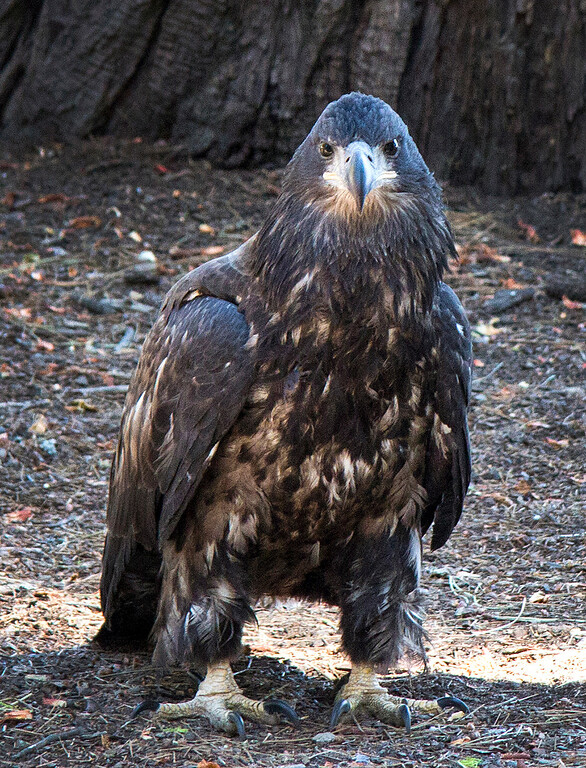 Another shot. He (or she) looks remarkably calm. There were really only a handful of people around, and the ranger people were making sure everyone kept a distance.

We drove down the hill and checked into an old motel in Columbia. It was hot, and there was a nice pool, where I spent the afternoon.

Columbia is an old gold mining town, and a big part of it has been preserved and restored and is a state historic park. We walked over there and looked around. I've been there before, but this is the first time for Malida. She really liked it. In the evening, we walked back over and had a really nice dinner.

There was a guy standing in the street playing guitar in the afternoon. I always like to stop and listen to street musicians.

We sat on a bench across from him and listened for a while. He looked familiar to me, and I was sure I had seen him before. It took me a minute, but I figured it out. After the song ended I went up and said hi. I asked him if he only played up here, or in other places as well. He said he played down in the Bay Area sometimes.

"My mom lives there," he answered.

I took a picture of him with Malida and my friend Lynn back in January of last year, on a street corner in Mountain View. It was the last time we saw Lynn, and the last picture I ever took of her before she passed away.

I've been thinking all evening about how unlikely it is that I would run into this guy up here.

It was an eventful day.
Collapse