It has been a busy and challenging week. I took my students to the hospital for the first time on Thursday. That was an easy day, because they mostly follow an RN around for the day, and I mostly just make sure all their accesses work and they know where to go.

On Friday they took care of patients, for the first time in three months after the summer off. It is kind of stressful, because they tend to make mistakes at the beginning, and I need to be alert for them, in spite of being woozy from the summer off myself. I had at least one "no--stop, stop!" moment, but mostly it was ok. Even after one day, I can tell which ones are going to soon be pretty much independent, and which ones are going to require a bit more of my time.

I remember writing a number of years ago, at the beginning of a semester, about the responsibility of being a nursing instructor. I like to think back to that and remember that it is still true. I don't stress about it much anymore, but I remain cognizant about what it is that I do.

One of my students was caring for a guy who has end-stage cardiomyopathy--a tired heart with only so many beats left in it. There was a care conference planned for when his daughter arrived. It turns out she was an old friend and coworker from way back when. It was great to see her. I sat in on the care conference and listened as the physician told the guy he only had a little time left, and outlined his options for hospice care.

I spoke with my friend after the conference, and she was totally on board with where things were--she has been dealing with this for a while. We talked about old times for a while. I mentioned that I had gotten married again, and she surprised me by telling me that back when I was single, one of our mutual friends had designs on me. I was totally oblivious to it, lol. And it would have never happened.

Later, I was in a room with another student, and her patient was a former ICU nurse. Turns out we had a lot of friends in common. I love those type of connections.

I mentioned in my last post that I remember taking a photograph of my friend Patrick when I visited him in Toronto 11 years ago. I found it this evening and am posting it.

This was the pose he made when I asked if I could take his picture. It kind of perfectly captures who he was. The most surprising thing about this image is that he is clean-shaven. I always picture him with the beard he had for most of the rest of his life.

I mentioned in the same post that he was my final stop in Canada before I passed back into the US. I was looking through the pictures for that day and found the one from when I crossed the border into New Hampshire: 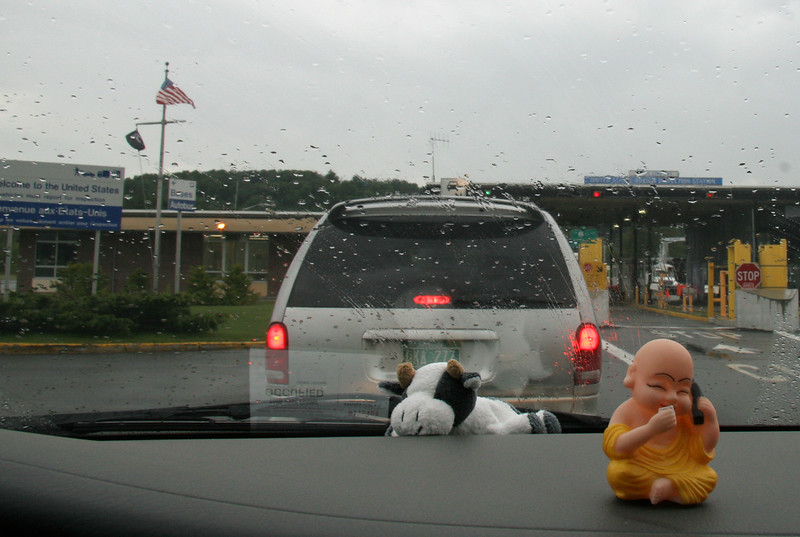 When I got to the border crossing booth, the border control agent yelled at me for not following the instructions. She said I approach before she gave me the signal. Eleven years later I replay that conversation in my head, and think, I should have told her to fuck off, turned around, and headed back to Canada.

That stuffed cow is long gone, but the monk still sits in my car, enjoying his coffee and chatting with whoever he is chatting with.
Collapse