First a couple of thoughts from yesterday. I woke up on Sept 11 2001 and turned on the internet, and that's where I first saw the news about the first WTC tower being hit--on my AOL news feed. I then turned on the tv and watched the rest of it unfold. Fifteen years later, I still look at my news feed right after I wake up, to see if anything bad happened while I was sleeping. Also, I don't watch tv news anymore. I see nothing to be gained by watching the same thing replayed over and over.

The other thing is that I always think of my friends Jim and Catherine. While I was processing the whole WTC thing that day, I got a call, and the news, that their son had died in LA of a drug overdose at the age of (I think) 24. He was named Teilhard, after their favorite philosopher-priest. That's what made me cry that day, and it is one of the things I always think about on September 11.

***************
The other day I got a Facebook message from a young woman I know in the Philippines. I had sponsored her through some relief organization while she was in grade school and high school. The sponsorship ended when she graduated High School. She is in college now, and found me on Facebook a couple of years ago. We have corresponded a bit. She asked if she could borrow some money for her tuition.

I thought about it for a while. She asked somewhat abruptly and out of the blue. I thought about how I don't really know her, but remembered that she sent me letters 4 times a year for about 7 years, with pictures of her growing up. I send letters sporadically, and she still has them, along with a picture of Malida and me.

The amount she asked for covers a semester of tuition and books. For us it is about 4 visits to the Korea BBQ. I talked with Malida about it and we decided we would help her. I asked the woman, Jecell, how I should send the money to her. "Western Union", she replied. I was kind of surprised, because I didn't know Western Union did that.

They do, and at a fraction of the cost and hassle of sending an international wire transfer, which is what I do every other month when I send money to my mother-in-law. To do the wire transfer, I have to go down to the bank, endure about 30 minutes of paperwork, and pay a $60 fee, every time. When I sent Jecell her tuition money, I did it online, it took 5 minutes, and the fee was only $7!

Turns out there is a Western Union office in a Thai bank, just a few blocks from where Malida's mom lives. We decided to do a test run and see how it worked. I sent some money this evening, and we called her mom to explain it to her. Her mom likes routine, so it was a bit disconcerting for her, and took a while to explain.

We gave her the phone number of the place. She called them and called back to report that she knew exactly where it was, just across from the temple, and down the street from the noodle place. That was really the biggest hurdle--having her figure out where it was. She said it was raining at the moment, but would go when the rain let up.

She just called from outside the building. She found it, but hadn't gone inside yet. Malida and I busted up laughing about this. "Call when you get the money!", Malida told her.

She will use the money we sent to open an account in the bank, at their suggestion. This way we can send the money directly to her account there every month. So simple. Figuring this out was worth the money we sent to Jecell, although I think helping someone with their education, in whatever way, always pays dividends that are more than we will ever know. 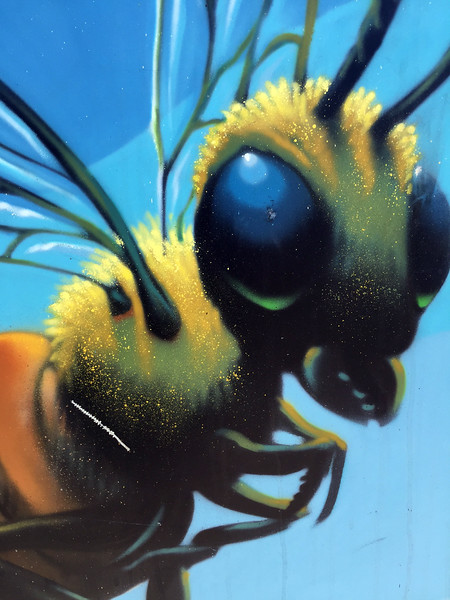 A random shot of a bee painted on a newspaper rack in Woodland. It's a portal.
Collapse