It wasn't a bad week, but I am glad for the weekend, though there is homework in the forecast. And taxes.

It got pretty cold last night--down in the 30s, and kind of cold, but sunny most of today. Usually when it is sunny and I am at the hospital, I spend a good part of my down time outside in the nice courtyard, but I retreated in to the usually overly warm break room pretty quickly.

One of the older nurses (my age or so) was having her lunch and we talked about the students. She is often a preceptor for me, and she was making some good observations about how the newer nurses didn't know how to step back and let the students learn, and how the students often failed to advocate for their own clinical experience. It meandered into a wide-ranging discussion about nursing in general. I enjoyed it. I like talking to her, as we share many of the same kinds of experiences over the years, and have seen the incredible changes that have occurred since we first started.

I was reminded of that in my post clinical conference when a student was describing a drug that is used in cardiac stress testing, and she didn't know how to pronounce it, because she had never heard of it. Aminophylline. When I first started in nursing, it was the first line treatment to promote bronchodilation in things such as asthma and COPD, and almost every patient with breathing problems was on an aminophylline infusion. Eventually better drugs were developed, and we stopped using it, except as a reversal agent for the drug that we use in non-exercise stress testing.

I used to sharpen needles for re-use too. 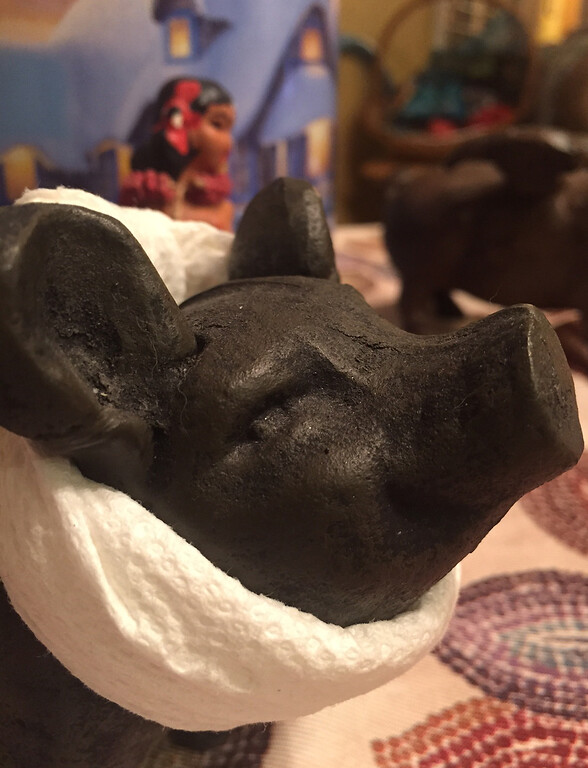 Malida thought the table pig was cold, so she made a scarf for him out of a paper towel.
Collapse