Here are a few more images from our time at the botanical garden the other day:

A rhododendron bud. This thing is impressive enough without a flower busting out of it.

I love the color of this one. A close-up with my macro lens. 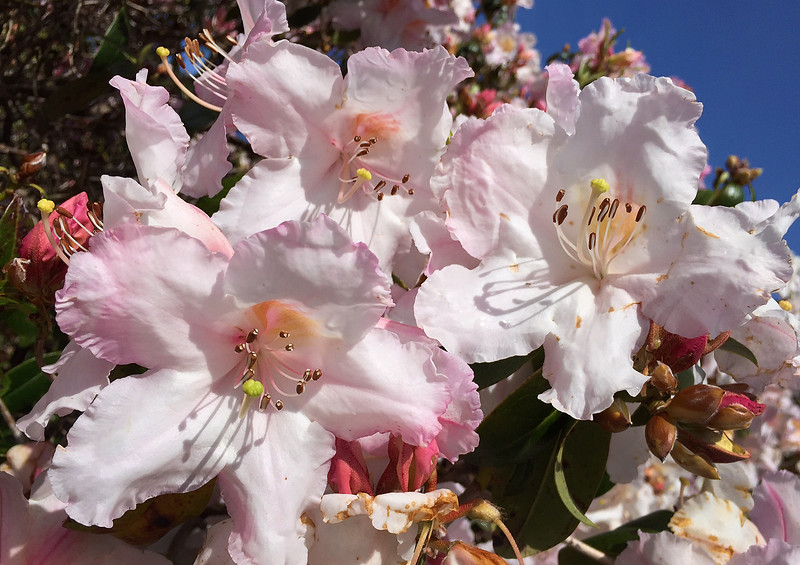 Although today is still part of my spring break, I had to go in to the hospital for a few hours to check up on my students. They are all doing fine. One of them had a patient go into cardiac arrest on her yesterday and she was still somewhat shocked by it. I can still clearly remember the first patient of mine who went into cardiac arrest. That was almost 40 years ago.

When we were driving home yesterday, Malida said she wanted to eat some soup. I asked her what kind, and she didn't know, but it had to be as good as the Mexican soup she had the other day. I thought about where we could get some soup, and was reminded of something that happened back when I was single.

It was about 12 years ago, and I began spending some time with this woman in LA that I met on a photography website. I spent a lot of time down there anyway, and we would hang out whenever I was there. She was a photographer, and taught me a lot about using my camera.

We began to talk every night on the phone for hours and hours and so on. We sent each other mix cds. We texted, back before texting was much of a thing. We decided we needed to spend some serious time together, and planned a weekend.

About two days before the weekend, she called and told me to stay home. She didn't give an explanation, but said she needed some time. So I stayed home, feeling kind of crushed. The next week things seemed back to normal. She invited me down again. I went down, and she spent most of the weekend actively ignoring me, engrossed in some sort of assignment she had to complete. On Sunday afternoon, she said "Let's talk".

She told me she didn't find me attractive, and couldn't have a relationship with me. That was it. She took me to a pity dinner at the Souplantation, which is a place that serves a bunch of soups. Then she dropped me off at the airport, and that was that. Adios.

I was so....I don't know. Heartbroken, I guess. I couldn't understand how it changed so quickly. It devastated me, but it was also one of the catalysts that pointed me in the direction I ended up going.

It's still kind of a big mystery to me why she changed her mind so abruptly. I don't fret about it anymore though. I eventually came to the conclusion that it didn't really matter why. Sometimes there are things that just shouldn't happen, and it takes a while to understand that.

So, anyway, Malida changed her mind about soup, and we ended up having a burger at the In-N-Out.
Collapse