I spent the morning getting all my end-of-semester paperwork in order and filing it away. There is a lot of papers associated with the preceptorships, and each semester takes up an entire three-inch binder. We need to find a way to make it electronic so we don't have to keep a bookshelf full of three-inch binders.

After I filed everything, I started packing up my desk and files. Most of the stuff I will take home with me. I remember asking someone last year, when we were packing for the move that didn't happen, what I should take home, and what should I leave for the moving people to take to the new offices. Their advice was, "take home anything you ever want to see again". Ok.

So I have about 7 boxes worth of stuff that I I am putting in my garage until my new office is ready for moving in on June 1 (or so they say). Everything else I am leaving there and don't really care if I see it again, although I am sure it will turn up eventually. 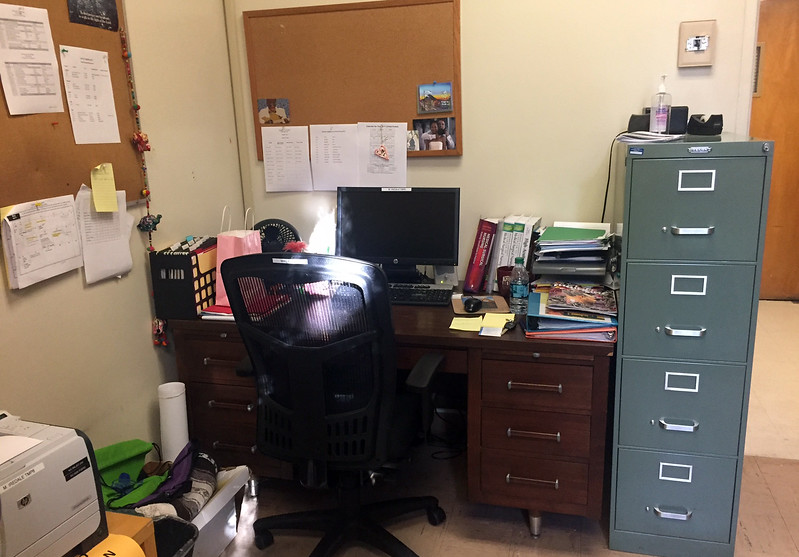 My desk before I started packing. It's not a mess because I was packing. It pretty much always looks like that during the semester. I think of it as an "active desk" where a lot of different things are going on.

I came home and watched the news this evening. I have noted that I don't often watch tv news, but today captured my interest. One of the more surreal moments was seeing John Dean, who was the White House counsel for Nixon, and who later went to jail, on the same panel as Carl Bernstein, who was one of the reporters who broke the Watergate scandal wide open, and led to Nixon's (and Dean's) downfall. It just goes to show you never know how these things are going to play out.