I am hoping that today was my last day of having to wake up early for a while. From here on in, it's sleep in until 8 for me. Unless I have to serve on jury duty, then I will probably have to get up early again, but jury duty would be worth it.

I got to the campus at about 6:45 this morning to help set up for our event/conference today. I discovered there is a small (6 slot) parking lot right next to our new temporary buildings, so I parked there, as it was close to where the conference was. I am thinking that when we move, if I get their early enough, one of those slots will be mine.

When I got there, the coordinator told me that the photographer/videographer had bailed at the last minute, which was kind of irritating, as I had recommended her. Fortunately I had one of my cameras in the car, so I took pictures and shot some video on my iPhone. I was also responsible for getting everyone who needed AV set up, so I was pretty busy. I logged about 15,000 steps.

The conference was great. We had about 150 kids there and maybe 15 parents. Lots of people came to mentor as well. We had a "power breakfast" where a mentor would sit at a table and talk with students. I was at a table with two brothers and their mom, and they had all sorts of questions about health careers. We talked the entire time. One of my former students was at the table as a mentor too, and he got to talk about his experience.

After the breakfast we broke up into sessions. One of my other former students and I led a discussion about what you need to do to apply to nursing school. That was fun too, and the participants had all sorts of questions. It was a group who was motivated to be there, and it showed.

We had lunch, which was a little long, and a lot of the participants kind of drifted away, so the afternoon sessions were less full.

One of the coolest hands-on sessions was one where the participants learned to suture. The facilitator brought all the supplies, plus a bunch of pigs feet for the students to practice on. 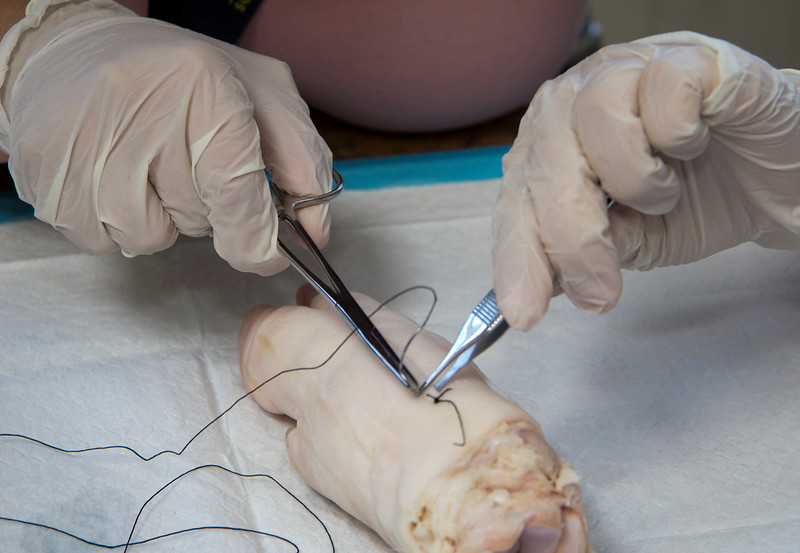 I remembered when I first learned to suture back in corpsman training. We practiced on real patients who were unlucky enough to require stitches. I loved suturing.

I left before the final session because I was beat. Plus, it is my other wedding anniversary. Our real anniversary is leap day, February 29. That's when we had the Buddhist ceremony in Thailand. Once Malida got to the US a year later, we got legally married at the county clerk's office. That's what today's anniversary is.

We always try to plan a little trip around this time, since it is also when school gets out. We will head to Yosemite for a few days tomorrow. I am looking forward to it.
Collapse