We got up fairly late, and eased ourselves into getting ready to drive to Mariposa, which is about 3 hours away. We eventually got on the road and drove through a bunch of small towns until we got to a small town that we remembered had good tacos, so we stopped and had tacos. The were as good as we remembered.

We made it into Mariposa at about 3 pm. We saw the same guy we bought some honey and raisins from last year, sitting by the side of the road, and we stopped and bought more raisins and honey.

We checked in, napped a bit, then hung out by the pool. There was another couple by the pool, who were from the same place we were. The woman was a teacher, and we knew people in common. We talked about the different places we have visited.

After the pool we cleaned up a bit and went down to a restaurant we had never tried before. We usually like to eat at the place across the street, but they are closed on Sunday and Monday, so we tried the other place. There was a wait, so we sat at the bar and split a flight of the local beers. They were all good, but my favorite was the dark one.

The food was amazingly good. I had a smoked ribeye and Malida had the trout. Even though it was a Sunday, the place was packed. We decided we will eat there again tomorrow, and made reservations.

I had about half the steak left over, so I sliced it thin. Our server was kind enough to give us a couple of rolls, so we could make sandwiches out of the leftovers tomorrow. I can't wait!

After dinner we walked around the town and in the park. We came across a 9/11 memorial near the creek. You never know when you will come across one. 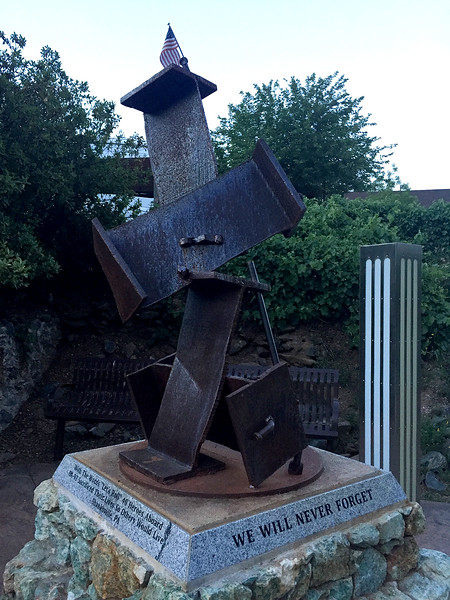 We will get up early tomorrow, because we hear that the entrances to Yosemite get backed up pretty quickly, and I don't want to spend hours waiting to get in. I'll probably take some pictures if I see anything good.
Collapse