It was a lovely day. I took a walk in the park and did errands, arranged to have the palm tree removed, made eye doctor appointments for Malida and myself, and had a nice salad for lunch.

In the evening I drove downtown to the new arena that opened late last year to see a concert featuring Roger Waters, one of the founding members of Pink Floyd. The arena is much better than I imagined. There is a plaza with some public art that leads to the main entrance. Lots of nice places to sit, which I did, because I was somewhat early. I watched people arrive for the show. Most of them were somewhere near my age, but a surprising number of younger people as well.

I had a pretty good seat about halfway back, but with a good sightline to the stage and the huge screen above it. The people sitting near me on either side were very friendly. I won the award for having seen Pink Floyd three times, and Roger Waters as a solo act once previously. The guy to my left, Carlo, said "Wow, dude! How old are you?" 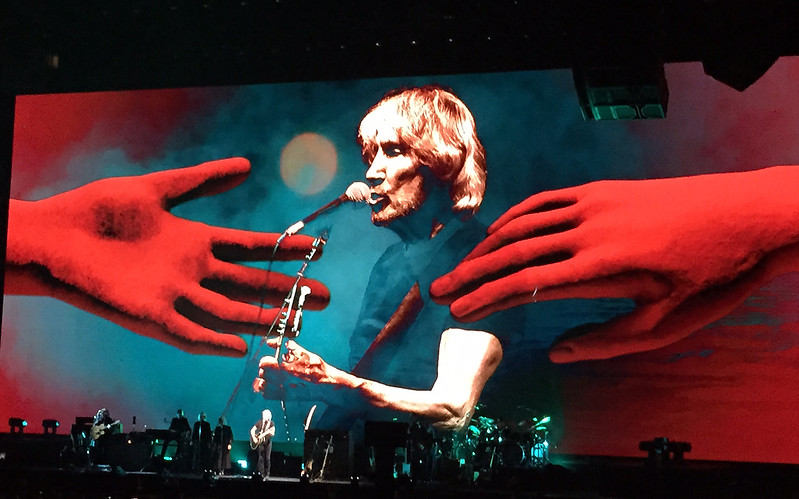 For the first half of the show, there was just a big screen behind the band. They projected all sorts of stuff up there. Pink Floyd was ahead of the game in concert visuals, and Roger Waters seems to have incorporated everything he has learned into this production.

During the second set, a second series of screens dropped down from the ceiling and bisected the audience. I don't think I have ever seen anything like it before.

Roger Waters doesn't make his dislike of Trump a secret. One of my Texas pro-Trump friends suggested that a lot of people would probably walk out at this point, but It brought the crowd to their feet, cheering.

And of course, a blurry photo of the flying pig. When I first saw Pink Floyd perform Animals, back in 1977 (40 years ago!!! Wow, dude! How old are you?), the pig was suspended on a wire and just traveled from the back of the stadium to the front. Now, the pig is a drone, with a bunch of little motors that someone is remotely controlling. This meant that the pig could wander all over the arena, which everyone loved.

It was a good show.
Collapse