The guys came this morning to chop down the palm tree. There were three of them. Alejandro and his two assistants. I asked him how he would do it and he explained it to me. He looked up at all the dead fronds and noted that there were probably some animals living in there, which someone had already suggested to me. Alejandro added that there might even be raccoons in there. We do have raccoons in our neighborhood, but I thought they lived in the storm drains.

He put a big ladder up against the tree and climbed up to the top. He cleared some fronds, then climbed onto the tree itself and roped himself in. His assistant removed the ladder and there he was, up in the tree, with a chain saw. I was impressed.

I would be reluctant to be up that high. 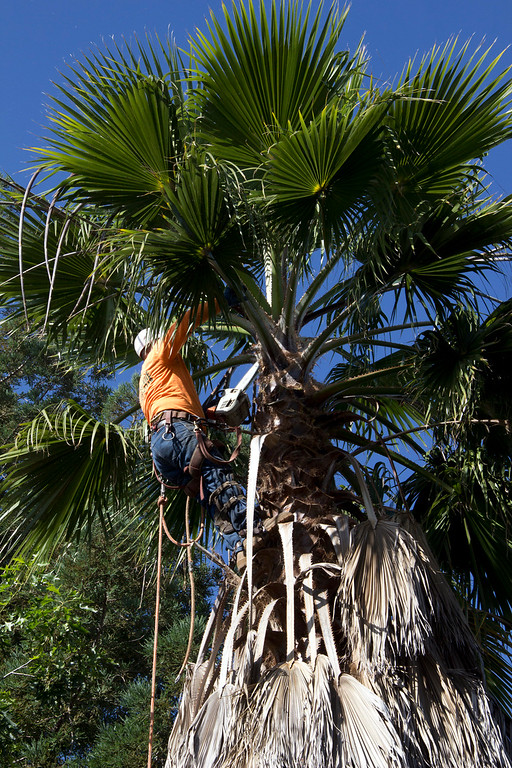 Once he was settled up there, he went to work. He dropped stuff down to his assistants, who took it out front and put it through a wood chipper. He has an efficient operation.

We went for a walk in the park and when we got back, they had the tree down, and were getting ready to go to work on the stump. Alejandro drove the stump grinder and got it down to nothing, then ground the stump of another tree we had taken out last year. They were done in about 2 1/2 hours.

Now it looks like this. The fence will come down in a week or two, and be replaced. After that we will have our garden guy clear things out and will build some planter boxes, etc. Malida wants a cherry tree too.

After the tree we went out and had Chinese food for lunch. We hardly ever have Chinese, because Malida doesn't like it. The place also has Mongolian BBQ, and I might go back on my own to try that.