We went up to Auburn to have Father's day at my step-sisters house. Pretty much everyone was there except for one step-sister (the one that usually does all the cooking for these things), whose husband is ill. It was nice to see everyone. I don't see my step-siblings all that often, but I enjoy being around them.

My dad hasn't completely bounced back from his cardiac issue and pacemaker placement. He seemed somewhat weak and frail compared to how he was a few months ago, though for 88 he is doing pretty well. In my experience as a nurse, I have seen that you can be really healthy at an advanced age, but it doesn't take much to disrupt that.

My step siblings' father, Dick, was there too, and he is somewhat in the same shape. After I got done talking with my dad about how he is feeling, Dick asked, "Is the clinic open?", and asked me about some issues he is having. Both of them had symptoms that their doctors need to know about, and I recommended that they both give their doctors a call.

My dad and Dick get along pretty well, considering they were both married to the same woman. I find that curious.

We had a great brunch and then everyone hung out in the pool, as it was about 104 degrees out. It was a lazy afternoon full of small conversations. I spent some time talking with my step-brother Eric. It was good to catch up with him. 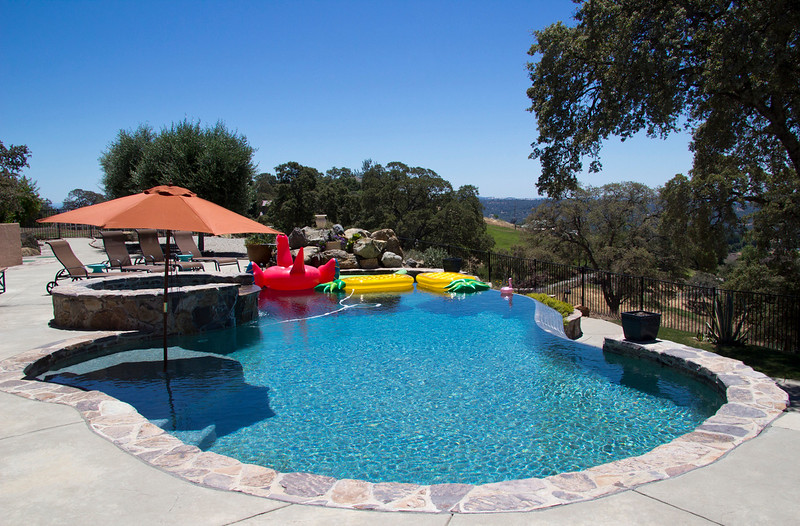 I'm not sure why I didn't take a shot of everyone in the pool. Maybe because I was in the pool too, and didn't want to get out. I would have stayed in there all afternoon if I had more faith in sunscreen, but I've been burned before.

The alpacas came out in the late afternoon and hung out under the shade of a tree.

It was a good day, and I was glad to see my dad and my family. He will be there all week, and I will go up again on Wednesday to hang out and visit some more.
Collapse