I was emptying the dishwasher this morning and realized that I tend to put my favorite coffee mugs in a certain place, so that when I open the cabinet, at least one of them will be there. We have a lot of coffee mugs--enough to last a month if we used one every day and them broke it. Some are in heavy rotation, and others just kind of sit in the back of the cupboard hoping to be picked. We have gone through them before and gotten rid of a few, but the "keep" pile is always more substantial than the "toss" pile. 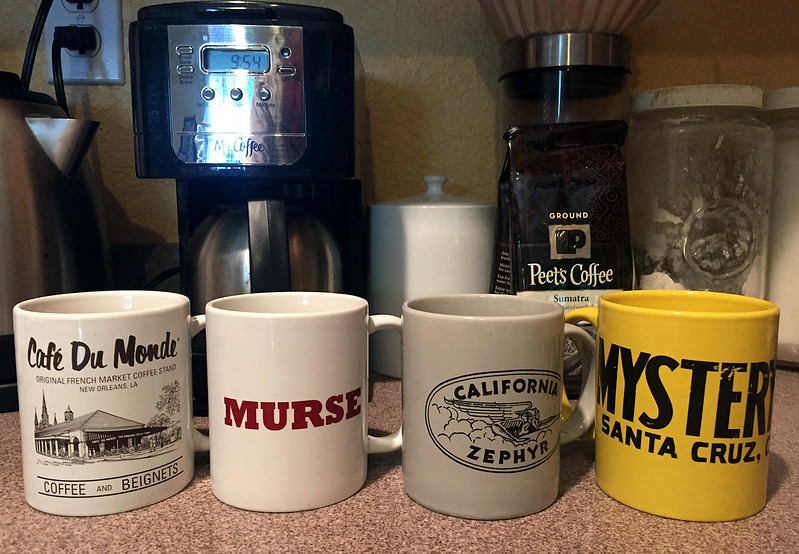 Cafe Du Monde: From my first trip to New Orleans back in the 90s when my mom got sick there and spent a month in the hospital. I have a newer Cafe Du Monde cup from the last time I was there earlier this year, and it gets an honorable mention.

MURSE: Given to me by my students a number of years ago. It was my work mug for a while, until I was gifted a pink Hello Kitty mug by another class. For work mugs, Hello Kitty has no peer.

California Zephyr: This is the mug I was holding in my hand when I realized that I gave certain mugs special preference. I bought this last month when we were at the rail museum in Jamestown. Even though it is the newest, it has risen to the top as far as mugs I prefer. There was at least one time this past week that I spared it from the dishwasher and hand-washed it so I could use it the next day. When I was a kid, we used to stay at some cabins along the Feather River, and every afternoon, the California Zephyr train would go past on the other side of the river, on its way to Chicago.

Mystery Spot: I love this mug. I got it at the Mystery Spot, which is a tourist attraction in Santa Cruz. It is one of those places where bowling balls roll uphill, etc. It is cheesy, but authentically cheesy. We were there about 5 years ago during a short but delightful trip.

In other news, I went in to work this morning to hand in the keys to the old building and pick up the keys to the portable buildings. We had been told that the portables would all be keyed the same, so we would only need a single key, but somebody thought differently, and we ended up with 7 keys.

Just before I handed my keys over to the operations person, I took a picture. She looked at me, and then down at the keys.

"I take pictures of everything." That seemed to satisfy her, and she handed over the new keys.

I'm listening to the final Pink Floyd album that had Roger Waters as part of the band, The Final Cut. For some reason it has been playing in my head all day. It is both a companion to The Wall, and a sort of Roger Waters solo album, as the other members had very little to do with it. I can remember sitting in my shithole apartment in Oakland listening to it for the first time, not quite sure what to make of it. Now it is among my favorites.
Collapse