We checked out of our motel this morning and stopped at the Safeway for apples and ice. We headed up to the Astoria Column, which is a monument on top of a hill overlooking the mouth of the Columbia River. 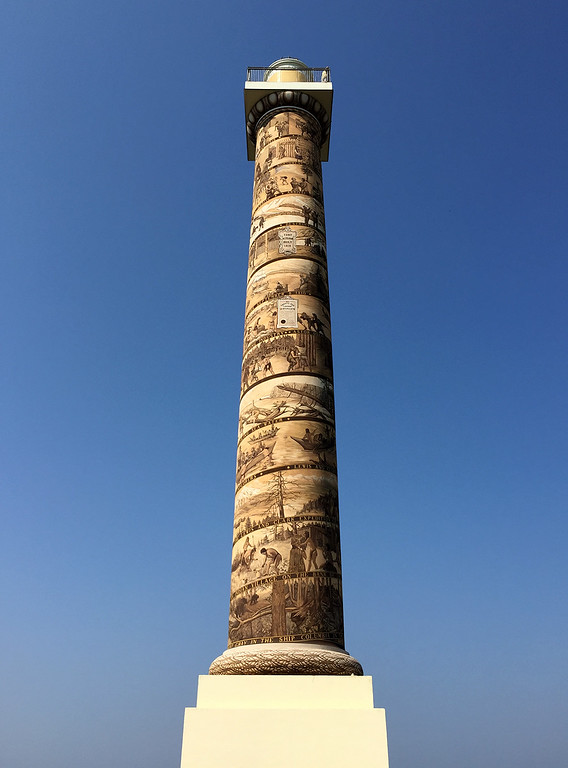 The tower was built in 1926, and is so many feet high. I first climbed the 164 steps to the top when I was 10 years old. 50 years later I climbed them again, though a little slower. My consolation was that there were two Canadian guys who were slower than I was.

Normally the view from the top is either obscured by fog or is spectacular. Today it was super hazy, apparently the result of the fires up in British Columbia and the heat.

You can (sort of) see the bridge to the top left that crosses the Columbia into Washington State. It was hot, but there was a nice breeze up there.

The gift shop down below sells these balsa wood airplanes for $1 each. We bought a couple and took them up with us. Throwing them off the top of the tower is probably one of the coolest things about being up there. Whenever anyone throws, everyone up on the tower critiques the flight. There are some air currents that tend to push the planes into a slow spiral down to the grass below, where someone generally comes along and picks it up and brings it up to toss.

Mine sailed way far beyond the grass, then circled around for a while, and landed right next to the gift shop. Everyone agreed it was a good flight. When we got down, we picked up a couple of planes for souvenirs.

Most of the rest of the day was spent driving down the coast in mostly bumper to bumper traffic as the temperature rose. In one inland area, it was 103. The views were shitty because of the haze. We got to our hotel, which is right across the street from the beach, at about 4:30. We walked over to the beach and enjoyed that for a few hours, then went to eat.

The beach after sunset. Tomorrow we head to Bandon for our last two days on the Oregon coast.
Collapse