I keep in touch with a couple of friends from my military days on Facebook. We were all stationed together in Germany, and were a pretty tight bunch. I did a google search the other day for another one of our friends, and was surprised and saddened to find his obituary from a few years ago. He was my dorm-mate in Germany.

His name was Mike Conley. He was an x-ray tech. He left the Air Force early after we all got busted for hashish. I lost track of him completely. When I was in Portland Maine 14 years ago, I found him in the phone book and tried calling him a few times, but no answer.

His obituary noted that after the Air Force, he became a letter carrier like his father. Eventually he became a caregiver for an in-home support services company. He became ill and went into hospice care. Before he died, he "sent his love to everyone he had ever known in his life. Everyone!" That made me cry. He was 56. 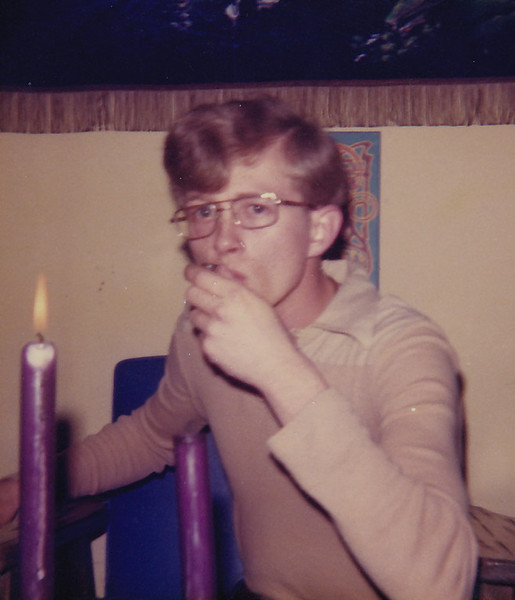 Mike smoking a bowl. Only picture I have of him.

I sent the obituary to my friends this morning, and we talked about him for a bit on the chat page. I wondered what became of one of our other friends, and googled him. Sadly enough, I found his obituary as well.

Kevin Belcher. I met him the first day of technical school in Wichita Falls Texas. He was my bunk-mate. The first thing I remember about him was that he took off his shoe and showed me his baby toe that didn't have a bone, because it got caught in a lawn mower when he was a kid. He wiggled it back and forth with glee. He was bigger than life, and always a character.

We got stationed together in Germany, and our first afternoon there went into town and had some pizza. They don't slice pizza in Europe--you have to eat it with a fork and knife. Kevin, undeterred, rolled it up into a big tube and dug in. He too got caught up in the hashish bust and got discharged early. I tried to find him over the years, but he was elusive, up until I found his obituary this morning. He died last year at the age of 59.

Kevin, standing next to me, holding the Trout Fishing in America bumper sticker. I'm the one in uniform. The guy on the other side of Kevin is one of the guys I still keep in touch with.

My friends and I talked some more for a while and decided we needed to get together some time in the coming year.
Collapse