I have the greatest boss in the world. As I have written, there are a bunch of us crammed into our little cubicle village. This includes the guys from occupational therapy.

Anyway my boss wanted to get a small couch to put up front so students could have a place to sit as they are waiting to talk to the instructors. She suggested a sort of flowery one, and the guys from OT complained that it would be too girly, or something like that.

So my boss got a plain blue couch. And ordered Hello Kitty pillows for it. 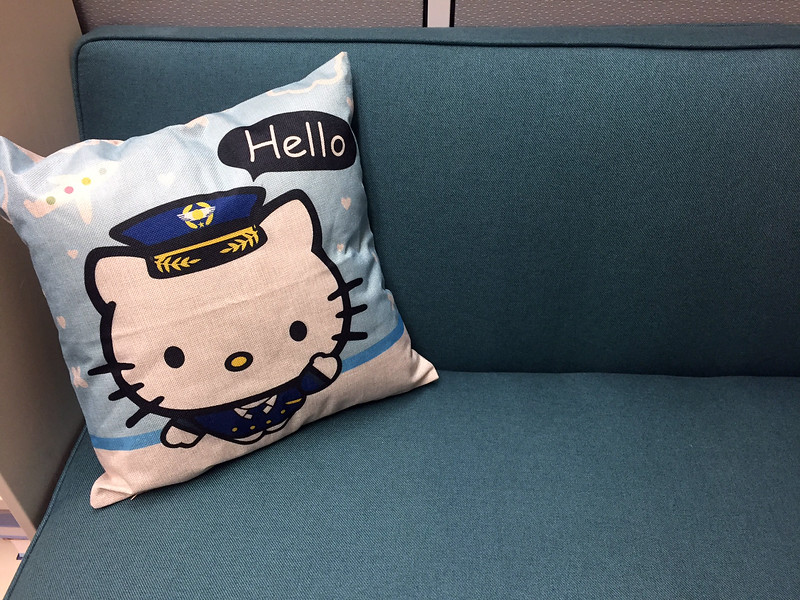 This isn't actually Hello Kitty. This is Hello Kitty's boyfriend Dear Daniel. He is an airline pilot. Like Hello Kitty, Daniel isn't a cat--he is a little girl, and like Hello Kitty, is five apples tall and weighs as much as three apples. She also ordered a Hello Kitty pillow for me. My boss is awesome.

One of my other colleagues brought me a big muffin because I helped her with her computer training course. It was delicious. I had it with my coffee.

Yet another colleague gifted me a little ceramic cat that can be used as a paper clip holder, which is what I am using it for. I asked her why she gave it to me, and she said, "Why not?"

I went to the hot dog place after taking my students for the hospital. The hot dog place is a little hole-in-the-wall that has been there since I was a student. Some new people bought it a few years ago, and have slows been making some changes--adding stuff to the menu, but without disturbing the essence of the place, or the hot dogs. I go there about once a month. That's all my sense of trying to lead a healthy life will let me.

As I was eating my hot dog with mustard and onions, I noted that the old manual cash register, a holdover from the days when they only took cash, had been replaced by an electronic one. I asked the server when they got the new one, and she mentioned it was just a few weeks ago.

He went on to talk about the place in Oakland where he used to eat great hot dogs--Kaspers, on Telegraph. It's same place I used to get hot dogs when I lived in Oakland. Turns out we lived about two blocks from each other in Oakland, and both moved up here in 1984. And we both enjoy hot dogs at the same spot. I thought that was pretty cool.
Collapse