The seller of the chair got back to me and I went to pick up the chair at 10:30. It was up in Citrus Heights, which is on the opposite side of Sacramento from me. It is where I moved to when I first moved up here from the San Francisco area 33 years ago. I was thinking about that when I was driving up there today.

I didn't want to move up here, but was transferred by the company I worked for to open a new industrial medical/urgent care clinic. Really, they were just getting rid of me. I sat up here for 3 months doing nothing and getting paid while the clinic was being built. The clinic finally opened and drew almost no business. I was fired about six months later--not because business was slow--I screwed up badly and deserved to be fired. Six months after that, I took the first of the classes that led me into nursing.

The people with the chair lived just down the street from where the clinic was. I drove past, and it is now an auto parts store. The liquor store next to it is still there. Liquor stores live forever.

The people selling the chair were in the midst of moving. Two young people with a little girl. They were friendly, and insisted on carrying the chair out to the car for me. I paid them and headed home.

On the way home I stopped at the cemetery where Arlina is interred. It is up that way, for reasons I can't quite remember. Closer to her parents, I think. Last Monday would have been our 24th wedding anniversary, so I stopped in to say hi. So much other stuff happened on Monday that I didn't even think about it on the day.

I stopped and got some soup for Malida and me and that's what we had for lunch. She's on a crash diet in anticipation of her trip to Thailand in two weeks. I came home to find her packing, again. She is a serial repacker, so I'm used to it.

I played a Tom Petty tribute set in Second Life tonight. I have been working on it all week. He has a remarkable body of work. Not just the many hit songs--there are all sorts of buried treasures. I played a lot of live stuff, because they sound so good live. A real rock and roll band. 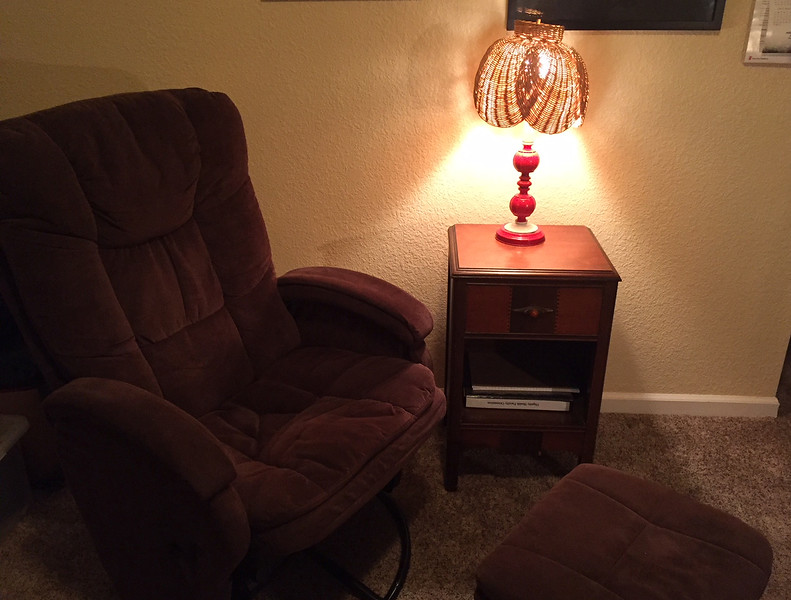 I set up the chair after moving a bunch of stuff around. It is comfortable, and fits nicely in the office. I didn't think to take a picture until after it was dark.
Collapse