We wrapped things up early today because I had to drive out to another hospital to do an evaluation on our new adjunct teacher, and observe him in the clinical setting. I tried to do this last week, but one of my students had forgotten to chart something, and we both missed the parking shuttle. The student made sure to be out of there on time this week, and we made the shuttle with time to spare.

The other hospital is on the other side of town, and it took close to 40 minutes to get there, and then another 10 to find a parking space. I hadn't been out to this hospital in about 15 years. Way back when I was preparing for ordination, I did my chaplaincy training there.

I found the adjunct and his clinical group, and observed. One student described a patient in his mod 30s--a chronic meth user, who came in to the hospital with chest pain. The patient was having a heart attack, and his heart was working at about 15 % of normal. The patient went on to have a stroke, and temporarily lost his vision. The student concluded with, "Other than that he was pretty healthy."

I had to fight the traffic coming home, and didn't arrive here until about 5, which made for a long day. Malida called shortly thereafter and described her day of exploring near the Burma border. She sent me this cool picture of a couple of monks at a waterfall. 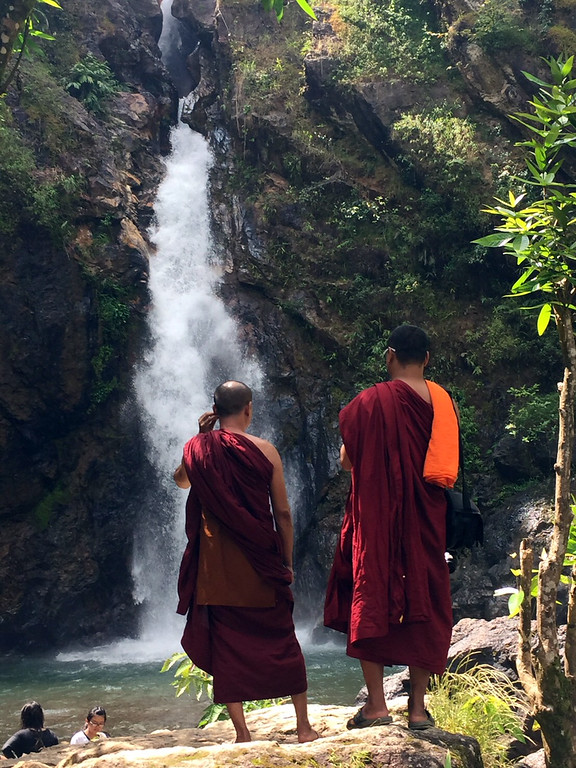 Which is good, because I took no picture today.

I did find this, though (while searching for an accordion version of Black Hole Sun). It is a video of some street musicians in Jerusalem playing Pink Floyd: