On the way home from work the day before I noticed that the "check engine" light came on. So today (yesterday, because I am a day late) I drove Malida's car to work. I forgot that her car doesn't have a faculty parking sticker, so I had to get a temporary pass from the campus police department. Easy.

We had our third exam, and it went well technically. A few students seemed a little stunned, but pretty much everyone did fairly well. This is the first exam with only clinical content, so it take a bit more critical thinking. I still marvel at how much simpler it is to do exams on this platform than the old one.

After the exam, my 4th semester colleague and I were discussing a student issue in our cubicle, where we have no privacy. I had decided to take a particular approach to the issue, and was discussing it with her. A nosy colleague from around the corner poked her head in, and informed us that she had overheard what we were discussing, and told us that "in our semester, we don't do it that way". I looked up at her and replied, "this isn't your semester." She replied with, "well I'm bringing it up in the next faculty meeting." Ok, then.

We need a cone of silence.

After work I stopped at the store to pick up some lobster tails that were on sale. My plan was to make a lobster salad sandwich. I steamed the tails in my electric pressure cooker (The Instant Pot), put them in an ice bath, then chopped them up. I added some green onion, celery, some seasonings, some mayonnaise (I hate mayonnaise, but it is essential), and some lemon juice. I mixed it up and put it on a grilled roll. It was so delicious! Hopefully this satisfies my long-running lobster craving. I need to go to the east coast one day and eat my fill. 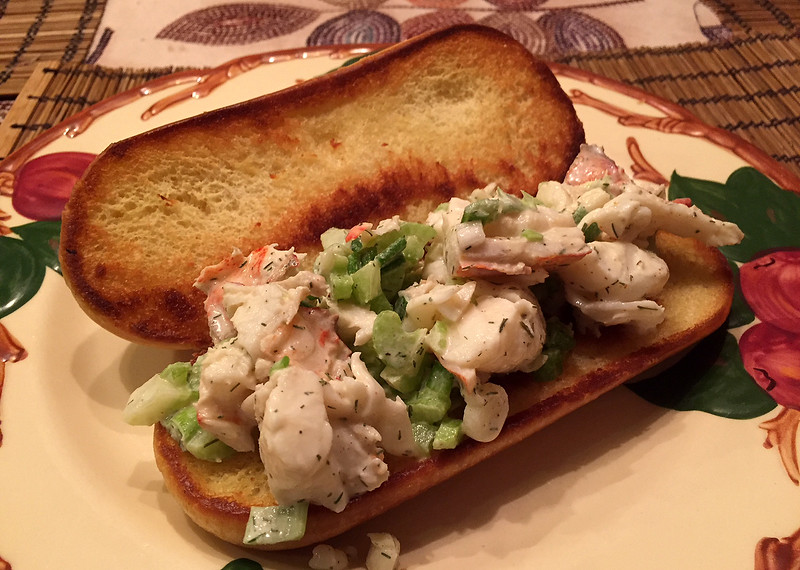 I had planned to not go into work today, and I was successful in accomplishing that. In my original plan, I envisioned driving up to the Sierras to take some pictures before the storms that are coming in tomorrow. In reality, I got up and took my car into the shop to have the "check engine" light checked out. In the old days I would have driven the car until something actually went wrong, but I am more conservative these days, and generally do what I am supposed to do.

I had a nice chat with the guy who drove me home in the shuttle. He was from a town near where my first wife was from in the Philippines, so we talked about Filipino stuff, and about the half built mall that is between my house and the dealership.

The mall has been half built ever since the great recession, when the company building it went belly up. It's been owned by the Howard Hughes Company for a while now, but all they have done is put up a sign every year saying it would be opening late the next year. Now there is an indian casino going in next door, and I expect that will be the impetus for them finishing the mall, late next year.

After I got home, I noticed that the cats were looking intently out the window at something, so I joined them. It was a cat that seems to enjoy hanging out in our back yard. I've seen her a few times before. She must come around pretty often, because the cats don't freak out--they just look.

When the cat saw me she started meowing, so I went out to see what was up. She's a pretty cat, and looks well-fed and well-kept. She meowed at me a big and I talked back. She came over and I petted her for a bit. I went back in and got her a few cat crunchies, which she seemed to appreciate. I took a couple of pictures.

I wrote a post in our neighborhood site asking if it was anyone's cat, because I wanted to make sure it had a good home. A while later a guy responded and said it was his ex-wife's cat, and he would tell her. She responded shortly thereafter and said she lived three doors down from me. The cat's name is Gemma, and she likes to wander the neighborhood. She won't wear a collar, but she's chipped and up on her shots, etc.

I mostly love our neighborhood site. It is a great way for our community to connect for things like this, and to stay informed about what is going on. There are a fair number of arguments about some things, but it is mostly the same players doing the arguing, and it is fairly easy to ignore them.

One of the more distressing post recently was put up by a woman who had noticed some homeless people around and wondered why no one had done anything to get rid off them. The responses were mixed between people expressing compassion for their plight, and others who saw them as nothing more than trash that needed to be removed. One of the worst things about social media, in my opinion, is having the heartlessness of some people not only exposed, but celebrated. Don't get me started.

I was looking at a picture on Facebook posted by my wife's cousin in the village of her and her sister in front of their parents' house. It was captioned in Thai, and Facebook provided a handy "translate this" button. So I pushed it, and it translated, "Our sister's sister is a birthmark". I love the translate function.

I put on the B52's first album when I made the previous post, and am still listening to it. What a great first album. It came out in 1979, and I remember listening to it a lot when I was living in Los Angeles. Still sounds fresh and unique.
Collapse