I did more office stuff in the morning. Unlike the day before, there were a bunch of people in dong stuff too. I spent some time talking with one of the other instructors about world AIDS day, and how much has changed since we got into nursing back in the lat 1980s. She marveled that all the advances we have seen not only happened in our lifetimes, but in our professional lifetimes.

I met with a student at 10 who wanted to review the kidney content. She already has a pretty good grasp of it, but has some trouble seeing how it fits in the big picture, which is not uncommon for nursing students. She was well prepared for our discussion, and had made notes and questions. I like to see students so committed.

I went to the hospital to look in on one of my students. It was her last day of preceptorship and her preceptor called in sick, so she ended up working with one of my former students who was very much like her when she was a student. It was a great fit, and they both got a lot out of the experience. The nurse wrote me a note today thanking me for trusting her with my student. I thought that was nice.

I was hoping that the delivery would come early enough for me to get out to the nature preserve before it got dark so I could try out my long lens. I made it about 10 minutes before sunset. It was a little too dark to photograph the birds sitting in the ponds, but not to bad for getting them flying against the sunset.

I'm not used to how all the settings work, and kind of wished I had bought the Canon, but decided to figure this camera out. I'm going to spend some time every day with it until it feels familiar and intuitive. It took me a long time to get to that point with my Canon, but I was much less experienced too. My goal is to be comfortable with it by the time we go to Thailand in the summer. 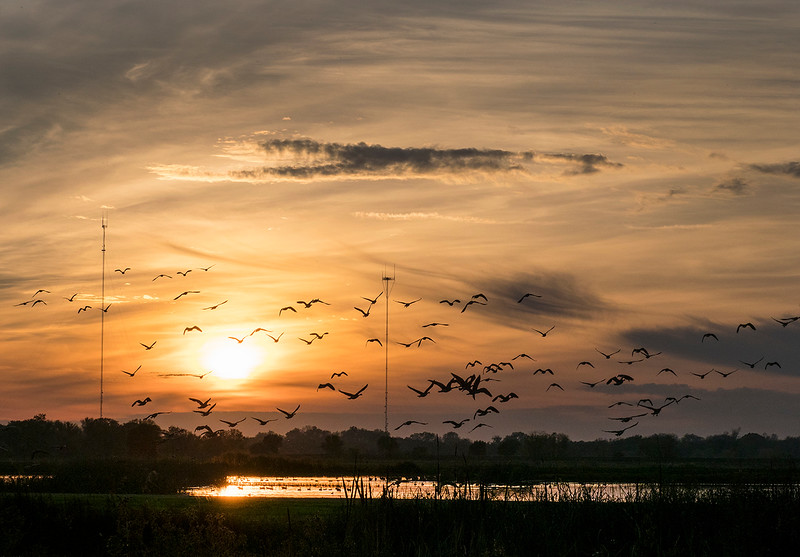 What was in the box? A treadmill. Malida has expressed the desire for a treadmill for months now. During the weeklong online sales, I found one she liked for a good price and ordered it. Since it is such a large item, they offer the opportunity to schedule a time and date for it to be delivered, with a 3-hour window.

It arrived yesterday, and when I opened the box, I realized there was quite a bit of assembly required. I don't like assembling stuff, but I can do it. They had an offer to send someone along to assemble it for an extra $25, but I said, no, I got this.

I got up this morning, had some coffee, dealt with the cats, then went to work. Some of it took two people, so Malida was my overly-helpful assistant. While I followed the assembly manual (18 pages worth), she helped by observing, "I don't think it goes like that," and so on. We eventually got it put together and turned it on, and it worked. She seemed kind of surprised that I possess the ability to assemble a treadmill. Me too.

I tried it out for a bit, and felt a bit out of balance. I prefer walking in the real world, but it will be good when the real world is inhospitable.

The treadmill now occupies the space previously occupied by another piece of exercise equipment. Which is the entry way to our house. We don't use the living room for anything, anyway, so it might as well be a gym.

After the treadmill, I headed downtown with the ultimate goal of seeing a student on her last day of preceptorship. I stopped at a taco place for lunch. Then I went to the local camera shop to look at camera bags.

I had ordered one online, but it was way too big for my needs, and I decided this was something I had to purchase in a real store. I looked around and found one that I liked. The salesperson was very helpful in showing me a bunch of less obvious features, and I bought it. I came home and loaded up my gear, and it is just the right size, and not too heavy.

I had hoped to do some street photography, but got caught in unexpected street traffic downtown, likely due to shoppers, and was in gridlock for about 45 minutes.

Once I escaped, I had just enough time to make it for my student visit. She is a good student, and everything went well. After that I came home and worked on dinner.

I'll go back to the farmers market tomorrow and take the new camera with me. It will be an opportunity to compare the new one with the old one, as I have a million farmers market photos with the Canon. Expect a persimmon picture tomorrow.

Tomorrow is the big moon. I did a dry run yesterday when I was out at the nature preserve, and I think I'll go back there tomorrow for the real thing, as long as it's not cloudy. Persimmons and the moon, if all goes according to plan.
Collapse