I got up at 8, just after Malida left for work. It was cloudy out, but not raining, which was perfect for my anticipated walk with

gracegiver. I was in no hurry to get going, and dwelled over a cup of coffee as I listened to some music.

The cats chose to just stare at me for a while. No idea what they are thinking about, but the last time they looked at me like this, I ended up with a busted toe.

I met up with

gracegiver and we decided to walk across an old railroad bridge and along a trail that follows the American River. she warned me that it wasn't the most glamorous trail, but it was a place I had never walked before, and that was good enough for me. We ended up figuring out a loop that was a bit longer than 5 miles. 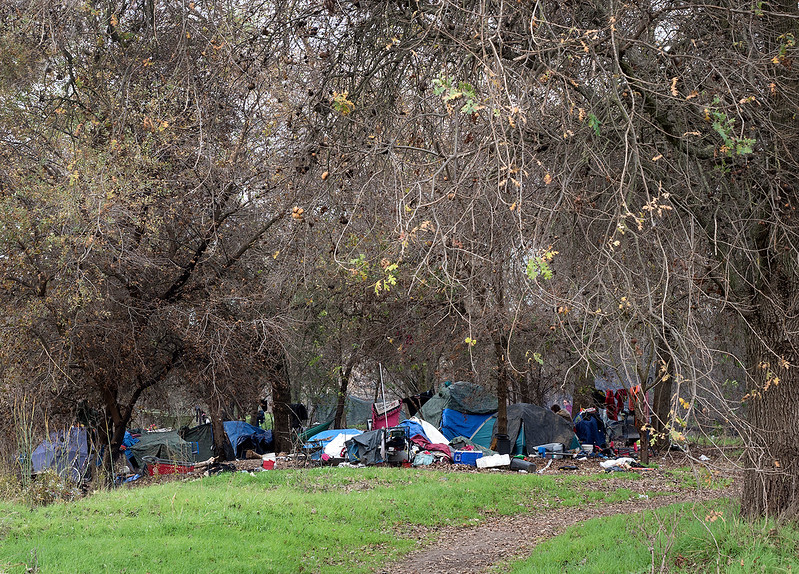 There are lots of homeless camps along the river and the surrounding parkway. This was one of the larger camps, with a number of people. Sacramento has a significant homeless population, and no one seems to have an idea about how to approach it, although the new mayor seems earnest about trying to figure it out.

A fungus growing on a tree. Probably my favorite picture of the day.

It was a nice walk and we had a great chat along the way. We had some delicious meatloaf, and then I headed home to do house stuff in anticipation of starting back to work tomorrow.

I have yet to build a sufficient head of enthusiasm for returning to work. Maybe once I get there and see everyone. I guess some people were so anxious to get back that they started today, as my email box had close to 30 new emails. Counting the days until summer break!
Collapse