We talked about going for a drive somewhere today, and it came down to a choice between San Francisco, and heading up into the Sierras to see if there was any snow up there. We opted for the latter. Malida said, "Wake me up so we can go early! Set your alarm!" So I did, and when I attempted to wake her, she muttered, "30 more minutes".

So I got up and made some coffee and listened to music, which is always a pleasant thing to do on a Sunday morning. Once she got up, we did our respective chores--I cleaned the kitchen and she took care of the cat litter box. An equitable distribution. We got ready and headed out at about 9, which is pretty much what we had planned.

As we headed up, we noted the places we had seen (and played in) snow in previous years. None this year. We did have that good rainstorm last week, but it was a fairly warm storm, and not much snow at lower elevations. We didn't actually see snow until we hit the 8000 foot level, and not too much.

Some ice fisher people on Caples Lake, which is about 8000 feet. Normally there would be at least 2-3 feet of snow on the ice this time of year. The ice looked kind of dicey too--I don't think I would have been out there. Maybe it just looks dicey because there is no snow on top of it. 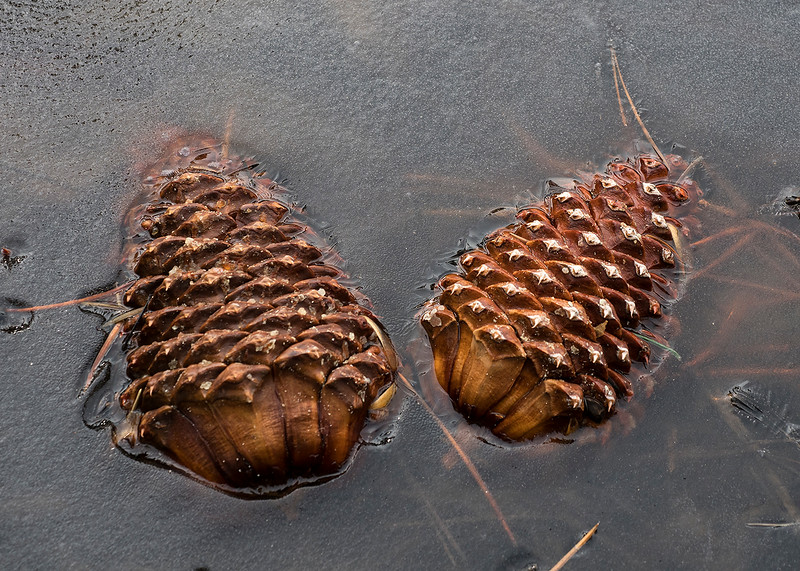 Some pinecones in the ice. It was around 50 degrees up there, and I didn't even need a jacket. A few years back it was 8 degrees with some wind, and that really felt cold. We are expecting some storms to come in this week, so hopefully we will get some more snow up there.

Malida contemplates the Carson River. She noted, optimistically, that the snow usually prevents us from walking around much here in the winter. We had a good time walking along the river and taking pictures.

I brought my tripod and neutral density filter and played around with some longish exposures. It was too bright to get some really long 2 minute-plus exposures, but I did get to play around with my remote shutter release, and it worked like a champ. I am planning some long exposures at Point Reyes, and it will come in handy.

On our way home we stopped at our favorite old roadside restaurant (a former stage stop), which has 33 different kinds of hamburgers. I had the mushroom burger and Malida had the one with pineapple. Both were delicious, and served as both lunch and dinner.
Collapse