I read something on Facebook the other day where someone wished there was a carwash place that also did pedicures. "And buff them with a bit of hot wax, while you're at it..."

I woke up at about 3 this morning and could tell I would feel better today. I rolled over and went back to sleep, and when I woke up again at 7, I did feel better, though still symptomatic. I could think again, at least. Yesterday it was as if my head was in a cloud.

I got up and made some coffee and did some of the work stuff I had brought home with me. At about 8 I called my boss and told her I was going to take today and tomorrow off, so I would be in good shape for Thursday. If I am not feeling well enough to go to clinical on Thursday, I will have the students research and write a paper on the disease process of one of the patients they will prep on tomorrow.

I spent most of the morning doing work stuff, and got a lot done. Mostly stuff having to do with my role as tutor liaison. I sent out a bunch of emails to faculty to remind them to have their students sign-up for tutoring. I remember getting those emails from the person I took this over from. I wish I could say I always responded right away.

I went to the store in the afternoon to get some orange juice and english muffins. I decontaminated my hands with alcohol gel and made sure I didn't breathe on anyone. It was good to be out of the house for a bit. 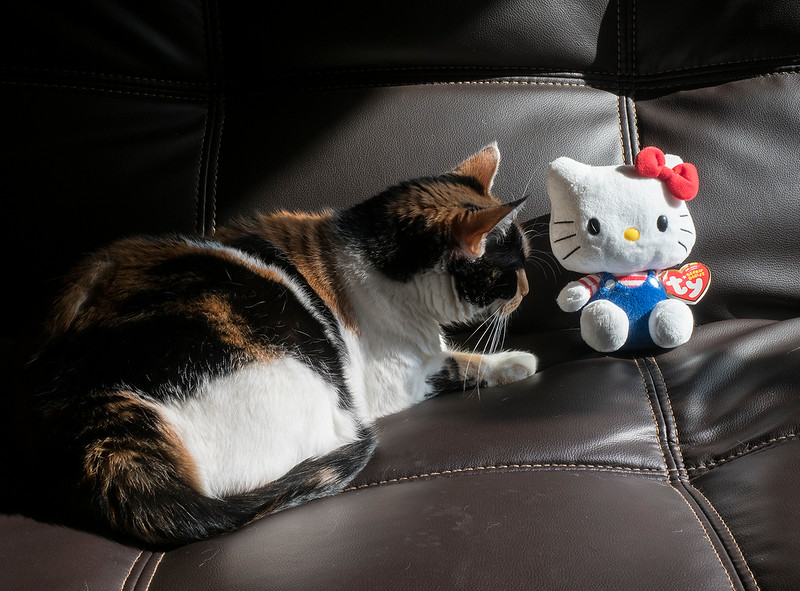 Mook and one of the Hello Kittys. The other cat was on the other side of Hello Kitty, but when she saw the camera, she took off, meowing, "no photo! no photo!"

I tried to take a nap in the afternoon, but wasn't tired. I watched some more tv and waited for Malida to get home. I checked the mailbox and found a package from China. It was something I ordered weeks ago--a small solid glass ball that you can use to make creative pictures. I didn't feel like going out again to try it out, so I pulled up a picture on the computer screen and tried it out on that.

I was thinking it would be fun to have on my coastal landscape photography trip for something unusual and creative. I'll play around with it between now and then and see what I can come up with.

Thursday is the first of February, and the start of the black and white photo challenge. Hopefully I don't forget.
Collapse