After work the other day, I stopped at the park to walk again. I like walking after work. This time, though, I had forgotten to eat lunch, and on my second lap started to feel somewhat hypoglycemic. I sat on a bench for a while, and eventually made my way back to my car where I had some hard candy. I drove home and had something to eat.

A few minutes after I got home, my neighbor came by to give me a big jar of honey. He is a highway patrol officer, and got it from some guy he did a vehicle inspection on. It's South Dakota honey. I had a teaspoonful of it and it was good. I laid down and had a nap. The rest of the day I felt kind of out of sorts. The word that kept popping into my head was "sad", but there was nothing really to be sad about. I went to bed early and felt fine in the morning. I was thinking this happened yesterday, but I guess it was the day before.

Last night I had interesting dreams that had nothing to do with the Queen of England, which was refreshing. I don't remember the dreams other than it involved photographing some old buildings, and some sort of drama associated with that.

I have gotten up at 5 am every day this week so I can get into the office early and get caught up on stuff. Yesterday I woke up at 4:50 and read a bit before getting ready for work. I discovered that Chocko doesn't like the new brand of crunchy treats I have been giving them, so I switched back to the ones she liked this morning. Everyone's happy now.

I left for work yesterday and almost got to the freeway entrance before I figured out that I was still wearing my comfortable house slippers. I turned back and put on shoes.

I got the mail after work yesterday and there was a postcard from Thailand. From Malida, who is here in the US. From November 1, when she sent it. She sent out a bunch of postcards when she was there, and everyone got one except me. Four months later, here it is. Tuk tuks.

Malida talked to her cousin in Frankfurt the other day, and they are going to be in Thailand the same time as we are. We are planning some sort of excursion together. We have gone places with them in Europe, and they are easy to travel with. Adi, the cousin's husband, likes to plan things out and make arrangements, so it is an opportunity for me to kick back and just enjoy the ride. 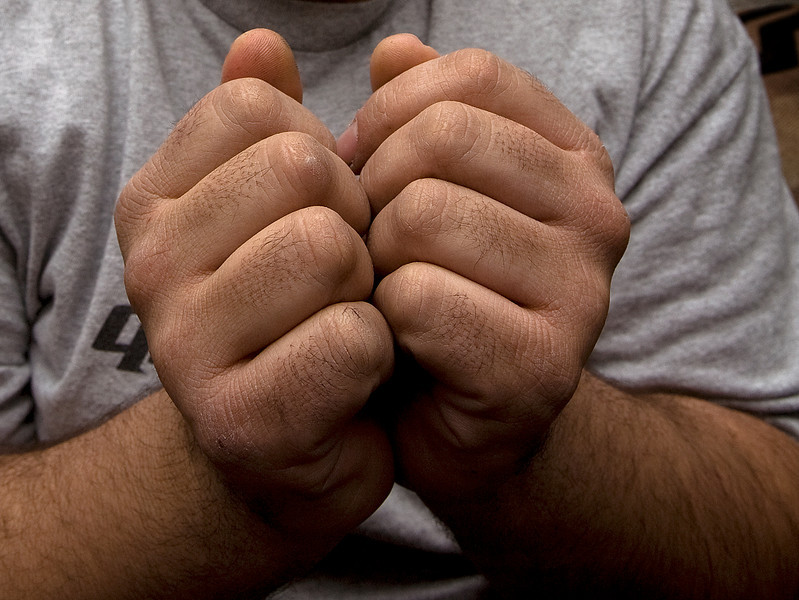 The hands of an Iraqi refugee.

I took this on my first assignment as a paid photographer for the alternative daily weekly that I eventually worked at for a few years. This guy acted as an interpreter for the US during the war, and was captured by some Al Quaeda people, who told him they were going to execute him. He escaped in the night, and eventually made it to the US. I took the picture as he displayed how they had bound his hands.