I got to campus a little early and went to my office to do a few things. I was in time to see the Physical Therapy program manager spill coffee all over herself as she came through the door. Larger than life. I commented that it was a real tragedy and walked over to the photo building for my class.

There are a lot of people in the class--probably at least 30. Many of them know each other from previous landscape photography trips. The only person I knew was the teacher. I met a few of the people sitting near me, and everyone seemed as excited as I was by the class. The first session was pretty much just going over the syllabus and expectations. Next week we will talk about locations. I won't be there, because I have a nursing alumni meeting at the same time, but will drop by after class to see what I missed. 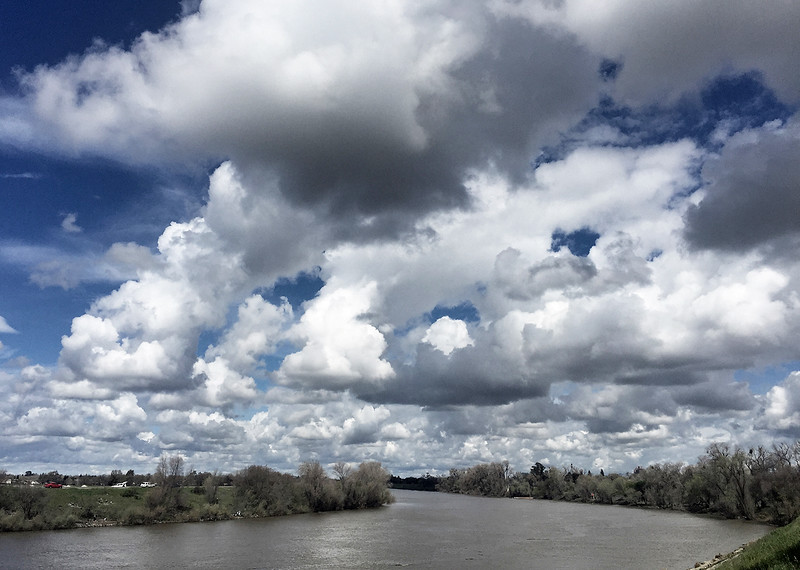 We got out early, and I drove over to the Sacramento River and walked along the levee trail for a while. The sky was filled with ominous clouds, but it only rained a little, and I was able to duck under a tree until it passed. It was actually a pretty day.

I called my sister to see about our plans for going to the tulip thing. Turns out it is next week, giving me a bonus Sunday. Yay! She just bought a new camera, similar to mine, and she is looking forward to getting some good shots, as is Malida. As am I.

On the way home, I stopped at the store and picked up some thinly sliced corned beef, some swiss cheese, and some rye bread. I made a sandwich (as I predicted), and it satisfied my need for corned beef for another year. I picked up some chicken breasts as well, and cooked them up for chicken caesar salads.

I spent the evening reading up on some more remote areas of Point Reyes. I have decided that my portfolio for the trip will be of places I have never before photographed, which should make it both interesting and challenging. I found a few interesting places that will look good if it turns out to be foggy, which is a distinct possibility. These places actually look better in the fog, so I'm hoping.

I got to bed late--after 10:30, which used to be early for me. I read for a while while I waited for Malida. I have started a new book. I haven't gotten very far yet, but already all the monkeys have perished in space. I have another book on deck after this one. Good to be reading for pleasure again.

A tree on the levee.
Collapse