It is raining pretty hard right now, and has been for most of the night. I left the window open so I could hear it falling. No better sound to sleep to. The weather people say we will get enough rain this weekend to fill our April averages. Normally I'd say we need it, but the reservoirs are full, so we really don't, other than what it might add to the snow pack. I like rain, though, so I'm not complaining.

It might rain next week during my photo trip to Point Reyes, though. I would rather it not rain then, but if it does, I will make the best of it and get some rain pictures. I'll have to figure out how to be creative with that. I am already thinking about one spot in the trees that might look cool.

I had some time between meetings yesterday and went over to REI and got a rain poncho (not a Sears poncho). I have a rain cover for my camera that has sat in my camera bag unused for at least 10 years. I'll bring some big plastic trash bags as well. This should ensure that it doesn't actually rain.

I had kind of a full day yesterday. I had to be at the hospital at 6:30 to meet with a preceptor and student. They were late getting off, so I had breakfast and worked on a planning grid for the next semester. Once they were done I spent some time talking with them about the preceptorship, though I could see that it was going well by the way the floor staff interacted with my student. Whenever I see the staff treating one of my students as part of the team, I know things are good.

I came back to campus and worked on stuff for a while before meeting with the guy who raises money for the college. My work with the alumni association has put me in the position to have to think of these type of things. Not something I really ever wanted to be involved with, but it's a chance to see how this kind of stuff works.

I was going to go out to Arlina's grave on the way to my next off-campus meeting, but it was raining too hard. It would have been her 61st birthday. I have a hard time imagining her at 61. Sometimes it's as if I knew her in another lifetime.

Yesterday was also the 42nd anniversary of the day I went into the military. I hadn't been thinking about it, but a friend on Facebook posted that it was her 42nd anniversary the day before, and that reminded me. She and I enlisted at the same time (though not in the same place) and met in corpsman school in Texas. We vied for being at the top of the class. After school I got shipped off to Germany and she went somewhere else.

Toward the end of my rotation in Germany, she was transferred to our base, and I assisted in the delivery of her baby. We reconnected on Facebook a few years ago, as well as some of the other people we worked with. I know Facebook is having issues, but reconnecting people is one thing it has going for it. 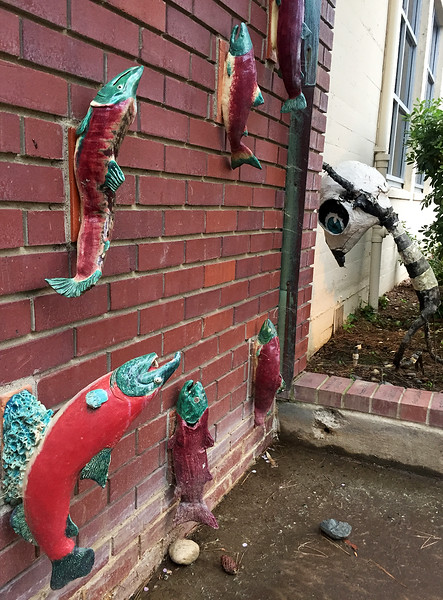 A fish ladder sculpture fountain that has no water. I think they turned off the water during the drought, and no one has ever thought to restore it. I'm going to look into it.

I have my photo class this morning, and then I am going out to practice taking pictures in the rain.
Collapse