It turned out to be kind of an odd day yesterday. As I noted, I was perturbed by my irritating colleague, who I need to come up with a name for. I'm open to suggestion. I taught the kidney lectures, but just wasn't into it like I normally am. I was disappointed. Kind of like going to Disneyland and getting the stomach flu. Or something like that.

After I finished lecture, I went back to my cubicle. One of my teammates was hot under the collar about something we were supposed to be only peripherally involved in, but the undercurrents have started to drag us in more, and the closer we get, the messier it looks. I wasn't in a mood to deal with it, but the more she talked, the more I agreed with her assessment.

So I went to talk with my boss about it, and she was concerned enough about it to call a meeting for this morning to discuss it with the key players. "I'm glad I'm not responsible for this," I thought to myself. After the meeting my teammates sent me home because that's the appropriate thing to do when I am crabby.

I had an unusually calming and refreshing one-hour nap before Malida got home from school. I had a dream about exploring some sort of abandoned urban wasteland, kind of like Chernobyl or something. Just before I woke up, I became aware that I was still sleeping, and savored the last few moments of the nap. I woke up less crabby.

Malida did some cooking, and I followed and made some chicken breasts for my big salad. She steamed some beets the other day, and I cut some up for my salad. It was delicious and filling. I am down another pound this morning.

I have another meeting to go to in a few minutes, so another prospective portfolio pic, featuring the lensball, which I bought for this class, but only used this once. 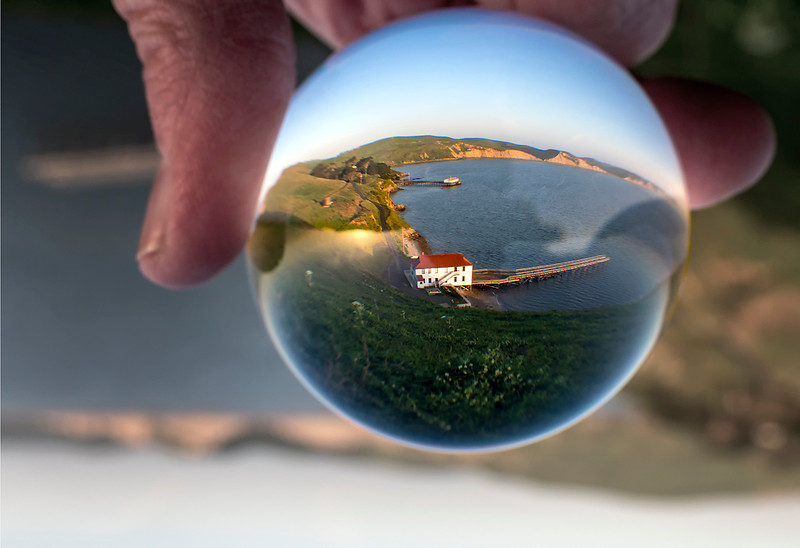