I am connected to the wireless hotspot on my phone, because the college wireless seems to be down. I don't think I can call the help desk and complain that I can't write my journal. It's been down a lot lately. I'll have to think of someone to blame.

I came home from work early yesterday. Malida was still home, and practiced her Ansel Adams speech for me that she had to give in class yesterday. It was pretty good, and I learned that he initially supported his photography hobby by giving piano lessons.

I made a sandwich for lunch. I have a drawer in the refrigerator that has all sorts of different cheeses, including some french cheese I got at the french cheese place outside of Point Reyes. Despite that, I used Kraft American Singles for my sandwich. I get on a Kraft Singles kick every few years, and eventually burn out on them, but I'm not burned out yet. My sandwich was a grilled cheese on dill rye. Mmmm--melty!

I spent an hour or so looking at pictures of Archer City, Texas, which was where The Last Picture Show was filmed. It is also the hometown of Larry McMurtry, who wrote the book. Thanks to Basefinder for pointing me in that direction. Interestingly, Archer City is just down the road from Wichita Falls, Texas, where I did my tech school training as a hospital corpsman.

I really only left the base a few times while I was there. Once to go to Flood Street, after our sergeant warned us, "Don't go to Flood Street!", and once for a camping trip with our teachers up across the border in Lawton Oklahoma. My enduring memory of Lawton was some guy driving down the street in a beat-up pick-up truck, with one of the tires on fire. After reading The Last Picture Show, that image makes a lot more sense to me.

My annoying colleague came around the corner a few minutes ago to tell me she was so busy one day last week that she forgot to eat lunch. As she was talking, she did her best to try and surreptitiously take a glance at what I was doing here. Apparently she didn't get a good enough look, because she just came around again. "I'm writing about you," I thought to myself.

I had some really vivid dreams last night. I can't remember what they were, but they were robust. Malida had to get up at 3 am this morning, so I was in the spare bedroom. She now goes in at 4 am every day, but gets off at 6, and thinks she likes that better.

I was going to post a larger picture of the Cypress Tunnel, at the request of benicek, that was part of my unused triptych, but forgot to upload it before I left for work, so I will do it tomorrow. In the meantime, here is a shot of Gumby standing near the American River. 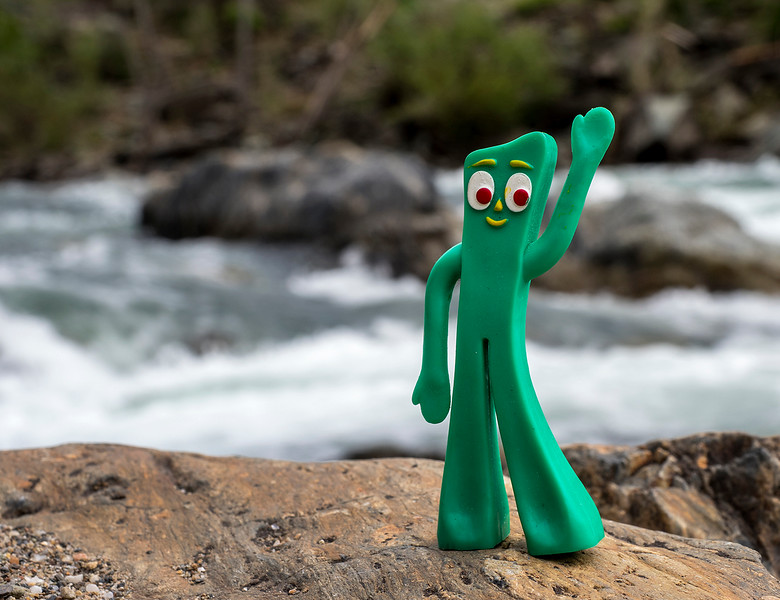