Yesterday was the final day of the Amgen bicycle tour, and it started and ended downtown, so I thought I would go. I didn't really want to go to the start or the end--too many people--but I thought I find a nice spot on the periphery. The race course left the city over the old bridge, headed up the old river road, then circled the town to the northwest of us before coming back the way it left. The final part was four laps around downtown.

I spent some time putting my photography stuff together. It's kind of a ritual. I generally pack light for something like this--a few extra batteries, a flash attachment, the big external battery for the flash, a lens cloth and some water. I brought my old camera along, but didn't really use it. It's like asking Grandpa if he wants to go along for the ride.

I found a nice spot on the far side of the bridge and chatted with the other people there. Eventually the race started and the peloton came across the bridge, and then they were gone. Boom.

"That's that," said the guy next to me, and he was right. I had planned to hang out until they came back, but looked at the map and decided to see if I could catch them on the river road. I walked back to my car and headed up the freeway about 20 miles.

I made it up there about 2 minutes before the peloton went by. They were riding pretty fast--better than 40 km/hour. I barely had time to get out of the car and to the side of the road before they came by. I like this shot because they are somewhat grouped by team. Interestingly, the CHP officer who was there holding traffic was the same guy I saw down south the other day--the one who had lunch with my friend. Small world.

I headed back into town and found a spot along the downtown loop. The women's race was still going--they did something like 20 laps around the downtown. I got to see the last 11 laps and get a few shots.

I think this was my favorite shot. Photographing these races is challenging. Pretty much all the riders are packed in together, moving fast, and are surrounded by cars and motorcycles ahead and behind them. I'm already looking forward to next year.

The men enter the downtown loop. The trees make for a nice backdrop, but they also drop shade all over the place. 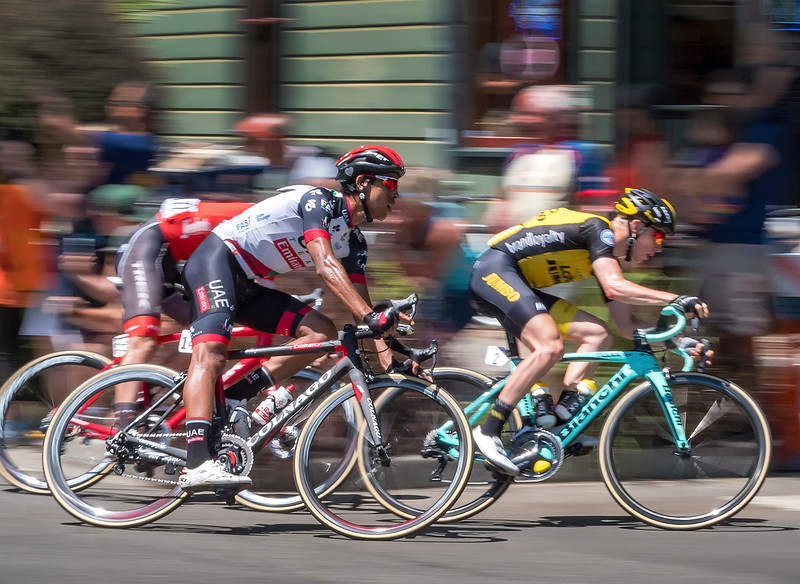 One of the shots I took using a low shutter speed and flash. I love this kind of shot. You pan along with the riders and hit the shutter about halfway through the pan. If you get it right, you have a clear rider and a blurry background.

The riders went around 4 times, and that was it. I went home, did some shopping, did the laundry, grilled some ribs, and watched some James Bond.
Collapse