Surprisingly, Malida got up early yesterday and got ready so we could go on our hike. I had to stop in at work first and open up a classroom. We are hosting a three-day licensure examination prep course for our graduates at the school. I did that, then we headed off to have a big breakfast before our hike.

The place we went is about 85 miles northeast of us, near the Oroville dam, which made headlines the winter before last when it almost failed. The hiking spot is called North Table Mountain, and is kind of out where the cows live.

It was a great place for hiking. The trail winds through some stands of trees, and follows a small stream, which is now nearly dry. I guess it is a bit more spectacular earlier in the spring. There are a number of waterfalls, which are also mostly dry. We decided we would go earlier next year.

There were bees everywhere, and we could hear a soft buzz almost the whole time. There were still some wildflowers along the stream, and lots of bees there too. We hiked in and back, about 6 miles or so. 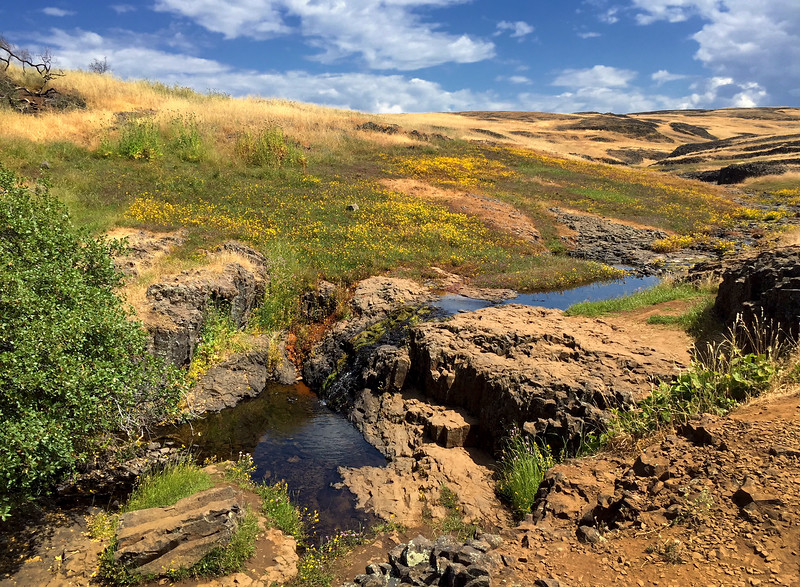 We ended up here. Just to the left of this shot is a tree overhanging the stream and some nice rocks to sit on. We had some fruit and listened to the bees. There were all sorts of things swimming around in the stream--polliwogs, a couple of really small snakes, and a bunch of water skeeters.

As we were heading back, we heard some thunder in the distance, and the clouds started coming in. No rain, but the clouds were pretty cool.

We headed for home and stopped for an early dinner at the Korea Bbq place, the second of two somewhat larger than normal meals that left me longing for a salad instead.
Collapse