I was expecting a package today, one that I have to be here to sign for, so I didn't plan anything. Then I got an email update yesterday that it was going to be delivered yesterday. I was going out, so I arranged to have it delivered at the local FedEx store a few miles away. In the afternoon I received an email telling me it had gone back to the shipping location. Apparently their delivery schedules are so tight, they are unable to adjust on the fly. One would think with such tight schedules, they might be able to give you a more precise delivery window other than "tomorrow by 8 pm". Anyway, hopefully it will be delivered to the FedEx store today.

After making arrangements for my package, I decided to to out and explore a bit, rather than go into work, which was my original plan. I have some stuff due next Tuesday, but I have Monday to do it.

I drove up to Sutter Creek, which is one of those small towns that popped up during the gold rush, and still exist along highway 49. I like Sutter Creek because of the old foundry that sits at the end of one of the side streets, though they have cleaned it up and it's not as visually interesting as it was.

I walked around for a while and looked in some shops. I was in search of an old concrete garden squirrel for our yard. Malida wants one as a tribute to the dead squirrel I found behind the fountain the other day.

I found a cool little garden shop with all sorts of interesting things, but no concrete squirrels. They did have an old concrete tortoise, and I bought that and put it out next to St. Francis.

I walked through the old church graveyard and admired the old locks on some of the gates. I'm surprised no one has stolen them. I didn't either.

I drove down to Ione to have lunch at my favorite Mexican place. They have the best tacos. Almost worth a trip up there just for the tacos.

I came home and did some laundry and stuff until it was time to go downtown for a concert. I was meeting my sister and her husband to go see Jethro Tull. We were supposed to meet for dinner first, but her husband didn't want to, so I just met them at the theater. We weren't sitting together, so it was mostly "hi" and "enjoy the show".

The show itself was interesting. The only real band member left is Ian Anderson, and he had some touring musicians working with him. It was the 50th anniversary tour, so there was a screen behind them showing footage of old shows. It was kind of strange to see 70-year-old Ian Anderson facing a picture of his 20-something self.

The band was great, but Ian Anderson can no longer sing. At all. It was weird. It wasn't just that he can't hold a tune--it was as if he had trouble getting the words out at all. He paused after every syllable, and was always falling behind the music. I thought it was some sort of neurological thing, but he could talk fine, move fine, and killed on the flute. Too bad. It seemed like they were kind of doing the tour on the cheap. They should have invested in some decent backup singers to take the pressure off. 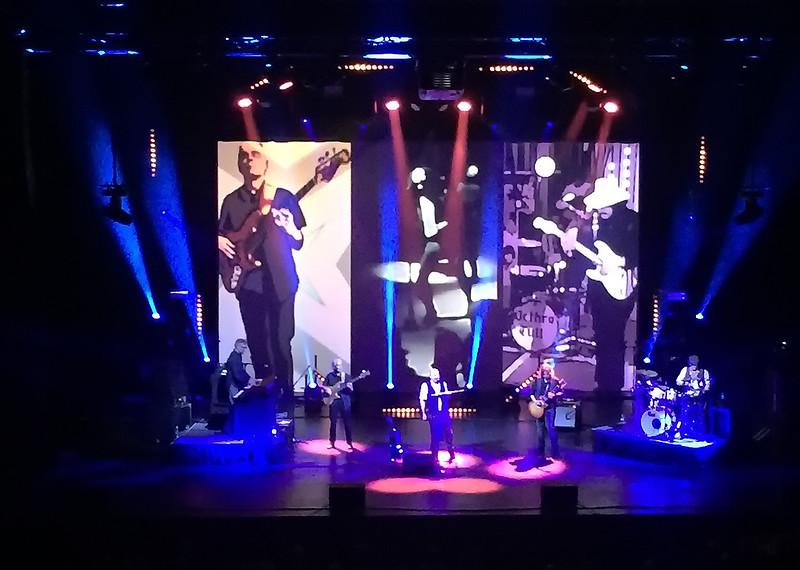 I got home at about 11, and watched a couple episodes of the Larry Sanders show, which is now 25 years old.
Collapse