I don't remember what I wrote about yesterday having to do with what I needed to get done today. Maybe nothing. Anyway, I didn't do what I needed to get done yesterday, so had to go in today and get it done. I'm not sure why it seems like such a monumental task. It's really just putting together a couple of hours of content for a group of high school teachers that I will be facilitating next week. Maybe it's because high school teachers seem more like adults than nursing students, though I have had nursing students who were teachers previously.

In any case, I got up early and went in, and sat there for about an hour drinking coffee, listening to music, and staring at a blank notepad. Finally I decided to go take a walk, and I walked around the perimeter of the campus.

It was a lovely morning--a bit cooler today than yesterday. I walked down near the light rail station, and around the stadium on the east side of the campus. The east side backs up to a bunch of railroad tracks, and what used to be a rail yard. Now the former rail yard is being developed, and they have built a pedestrian bridge over the tracks to connect it with the campus. At the foot of the bridge is a planted area with big river rocks. 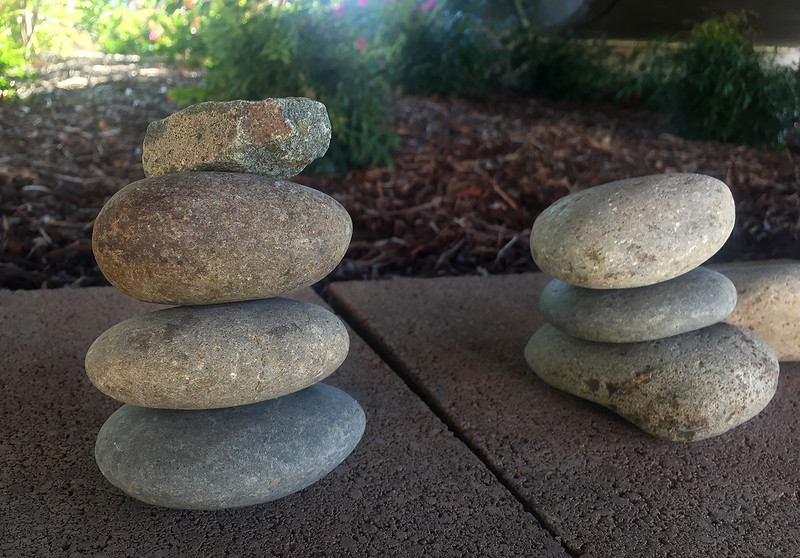 I was pleased to see that someone took the initiative to stack some of the rocks. I approve. I continued south to the street, and then turned west. Our old building is on the southwest corner of the campus. I noted that even though we have been out of there for more than a year, the building still stands, with every brick intact.

I guess it's gonna be a while before we can move into the new building.

I walked along the western side of the campus until I was at the northern edge, where our little temporary village sits. I propped open the office door to let some of that beautiful morning in. I poured another cup of coffee, sat down, turned up the tunes, and got started. I made a quick outline, then started putting stuff into a presentation. I finished at about 12:30, just as the person I was supposed to send it to dropped in to see how it was going. She was pleased with what I came up with, and so was I.

After she left I sent it off, then went into the simulation lab to play with our new sim people, which I will be using in the class next week. They are way cool, and are operated by a tablet. I turned one of them on and after it warmed up, it opened its eyes and said "hello!" Kind of awesome-creepy.

Tomorrow we are going hiking out on the coast. It's supposed to be 70 degrees. Perfect.
Collapse