The class is much more interesting than I imagined it would be. The morning session kept my attention fully, and I learned a lot about all these numbers we get. We got a nice break at lunch and we walked around the Pearl District, which is where the meeting and our hotel is. The Pearl District used to be the warehouse district, where they would transfer goods from the river to the railroad, and vice-versa. Many of the old buildings are being restored and converted to lofts and other things. The building we are in was converted about 17 years ago, and is pretty cool. I didn't get a shot of the building itself, but will try to get one today.

This is a door in the back of the conference room, signed by all the construction people who worked on the restoration. I thought that was pretty cool. They told us that close to 90% of the stuff they tore out of the building was reused in the restoration.

The conference food was great. Best conference food I've ever had. They had a bunch of salads, some really delicious creamy polenta, some tasty chicken, artisan cheeses, etc. We had been planning to go out for a big dinner at McMenamins Edgefield after the conference, but ended up sitting in the hotel bar drinking wine and getting some not-very-good hipster tacos down the street later on. I got up to my room later and was exhausted, but watched most of Blade Runner 2049, which was pretty good. I'll have to finish it one of these days, and watch the original, which I have never seen.

We have another half-day this morning, then will go out to McMenamins for lunch, and head to the airport to go home. 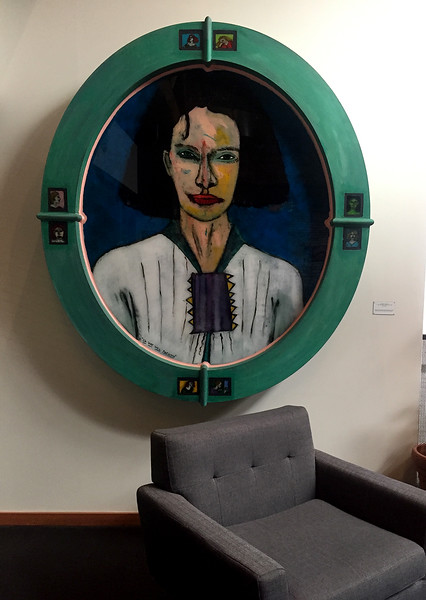 A portrait in the lobby of the conference building.
Collapse