By request, here is how I made my potato salad:

I took 6 potatoes--3 red, unpeeled, and three Yukon Gold, peeled. I cut them into cubes and boiled them in some salty water until fork tender. Once they were done, I let them sit for about a half-hour to cool, in the water. Then I drained them, and squeezed a half a lemon over them and added some salt, pepper, and a bit of cayenne pepper to taste.

While the potatoes were cooling, I fried up 3 strips of thick bacon until done, but not crispy. Once that cooled, I chopped it up.

I put the potatoes in a big bowl and added in the bacon. I also added two finely chopped stalks of celery and two chopped green onions. I thought about some red onion too, but didn't add any this time. You could put eggs in at this point if you liked eggs.

I mixed 1/2 cup of sour cream, 2/3 cup of mayo, and the juice of the other half of the lemon, and mixed it together, then added to the potatoes. I mixed everything up until it looked good. I added a bit more mayo and some more pepper. I refrigerated it before serving. Then we ate it.

We did a bunch of stuff yesterday to get ready for the trip. I bought a new suitcase after noting that the zipper on the old one had busted. We had lunch downtown and stopped to get another pound of yeast flakes for the cousin. I came home and packed up my new suitcase. Once done, it weighed in at 24 kg, which is 1 kg below the limit. Only half of that is my stuff. The rest is chocolate, yeast flakes, acne cream for the nieces, and other assorted stuff.

I rechecked my camera bag, and it is still fine. the weight limit for carry-ons is 7 kg, and it weighs in right at 7. I have one other smaller carry-on bag with my good headphones, a neck pillow, a battery pack to recharge my phone, and a hat. 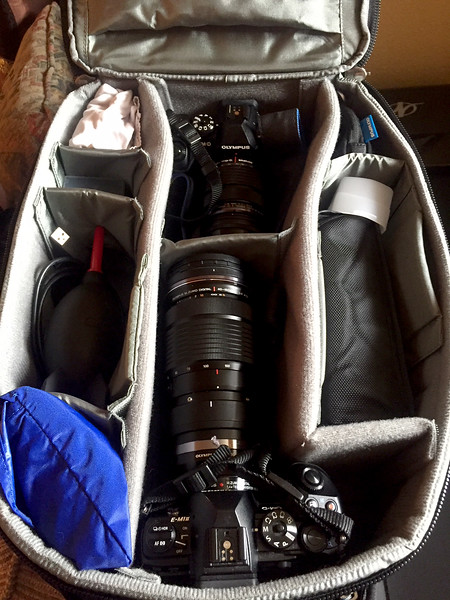 My neighbor who is going to look after our cats has been out of town all week. I was kind of stressing about that, though I have a plan "B". I got a text from him today that he will be back at 4. Since we leave at 8, that gives us plenty of time to go over what needs to be done.

Everything else is done. Now we just kind of hang out until it is time to leave. Maybe take a nap.

We're waiting in the airport for our flight. I always post a picture in the airport. It's generally the least interesting of the trip. When we get to Taiwan, we will have some noodles while we wait for our connecting flight, and I will likely post a picture of that too. By the time we are in Taiwan, we will have bypassed Saturday altogether, and it will be Sunday morning.

I don't really sleep on the plane--I zone out and listen to music. One we are in the air and settled, they will serve dinner, then dim the lights. Once the lights come back on, they will serve breakfast, and we will think about landing. Something like 14 hours. From Taiwan, it's only about 2 1/2 hours to Bangkok, then a taxi ride from one airport to the other, so we can take the plane to Malida's home town. We will arrive at her house about 27 hours from now.

I took a nice nap this afternoon in anticipation of being up for a while. I miss my cats.