I'm no good at rewriting things, as I generally write in the moment. That being said, it's fairly easy to repost pictures, which is mostly what The Lost Entry was about. And, of course, being removed from the immediacy of events does give one a different perspective. lol. We woke up at 4 am, and I am a bit punchy. 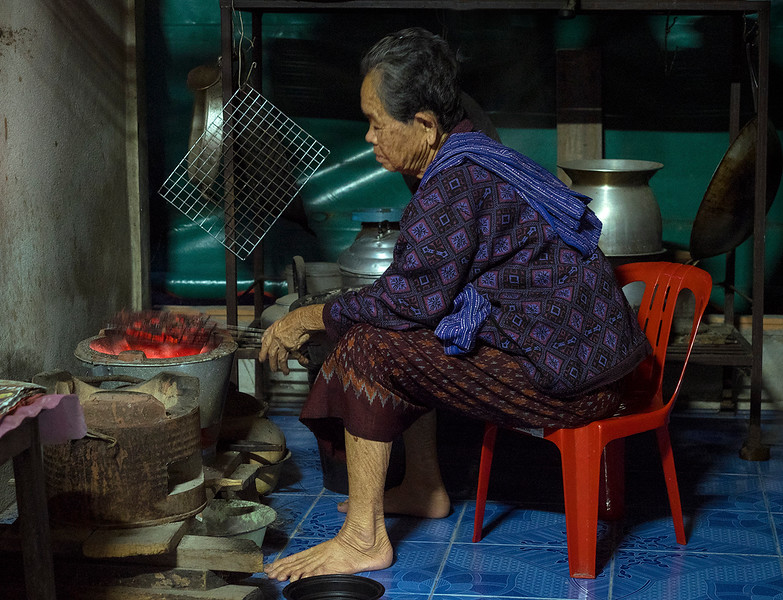 One of the first things anyone does here, early in the morning, is to start the charcoal grill and make the sticky rice. Since Grandma is staying with us for a few days, she was the one who did it. Sticky rice is kind of the one staple of their diet here. Since the family grows sticky rice, there is always plenty of it. After it is done, Malida's mom will sometimes shape a hunk of it around a bamboo stick and grill it a bit for me. One of my favorite things here. In this picture. Grandma is grilling some pork for me, to go with my sticky rice. 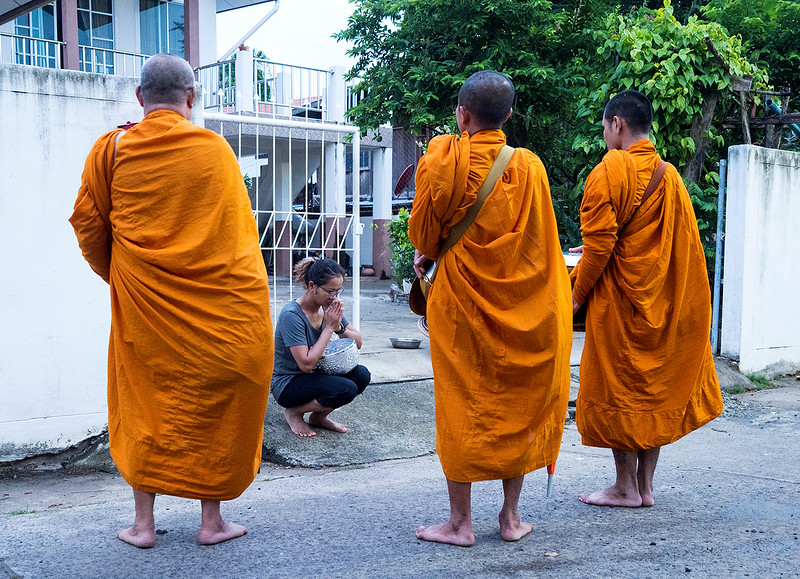 The next thing that happens is that they go out to the street to give food to the monks that pass by at around 6 am every morning on their alms walk. The food they collect is what they eat for the day. Yesterday Malida gave bananas and milk. Today it is Cheetos and fruit juice. She likes to mix it up.

A woman making sticky rice and grilled meat at the market.

After we ate, we went out to the market her the river. It is like a big open-air farmers market, with both fresh produce and meat, and stuff that they cook there. We had some really thick (and delicious) coffee and some sort of steamed dumpling stuffed with water spinach. After we walked through the market, we walked along the path that follows the river. We came across a temple with some beautiful gardens, which is where I found yesterday's monkey.

After we got back, we dropped Grandma off at the hospital, for an appointment, and visited a friend who was a patient in the hospital. We spent the afternoon in some government offices applying for permission to drop a well on the property for our water supply.

Government bureaucracy is the same everywhere. There was some copying fee of about 25 cents, but they didn't take cash. If we used our ATM, we would have incurred an $8 international fee. So we had to go to the bank, sign some papers, get a cash card filled with the 25 cents, and return to the office to complete the process.

In the evening we went and got some pizza at one of my favorite places in town. It's owned by a guy from Italy. He has since brought in a partner from Australia, who I had met before when he ran another expat restaurant, which he sold to a couple of German brothers who used to live in the US. I met them the last time I was here. Anyway, the pizza was good. 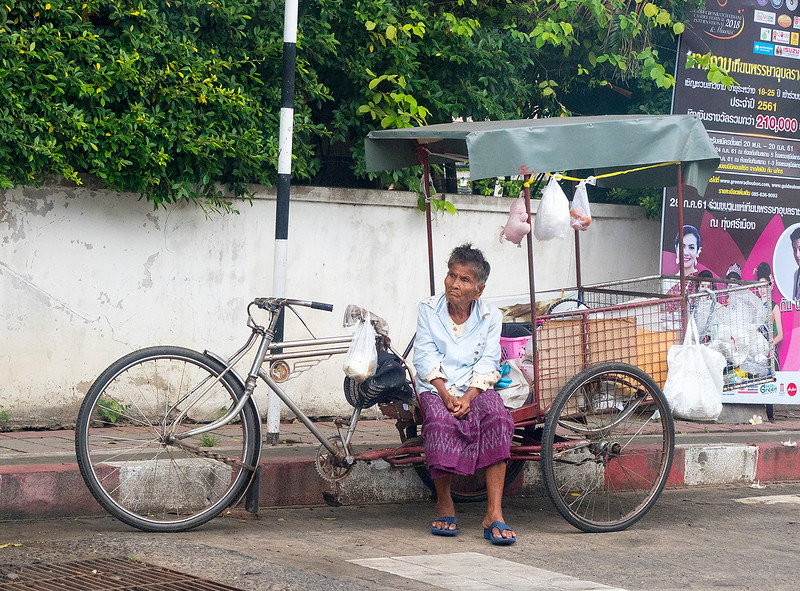 An old woman and her pedal taxi. It's hard work. 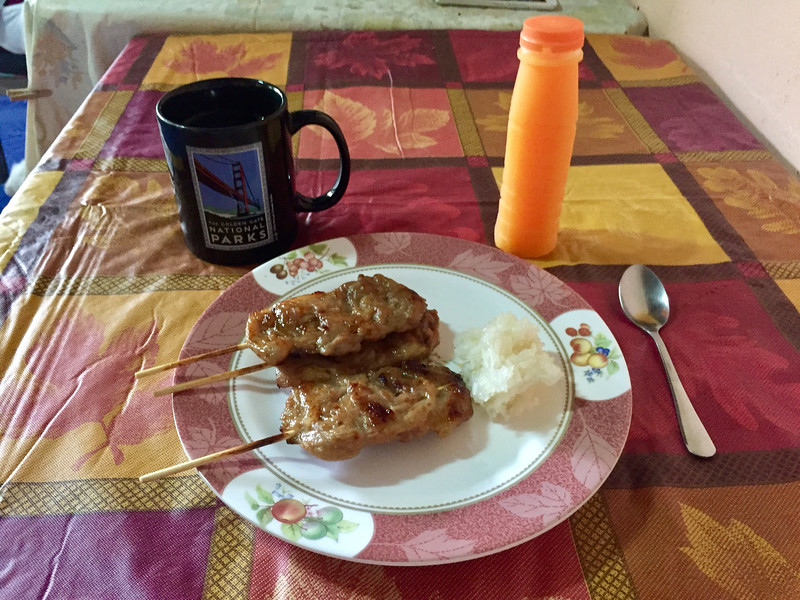 We decided to get out and take a drive yesterday, so we headed up the road toward the Mekong, which is about an hour away, and separates Thailand from Lao. It was cloudy, but we didn't really see any rain. We ended up about 3km from the border crossing, where we will cross over this weekend, at another lovely temple.

Wat Sirindhom Wararam sits on a hill overlooking the mountains to the north, and the Mekong, and Lao beyond to the east. It was pretty cloudy, so the views weren't that good, but the temple itself is impressive. Malida tells me that most days there are loads of people here, but today there was hardly anyone. Good. 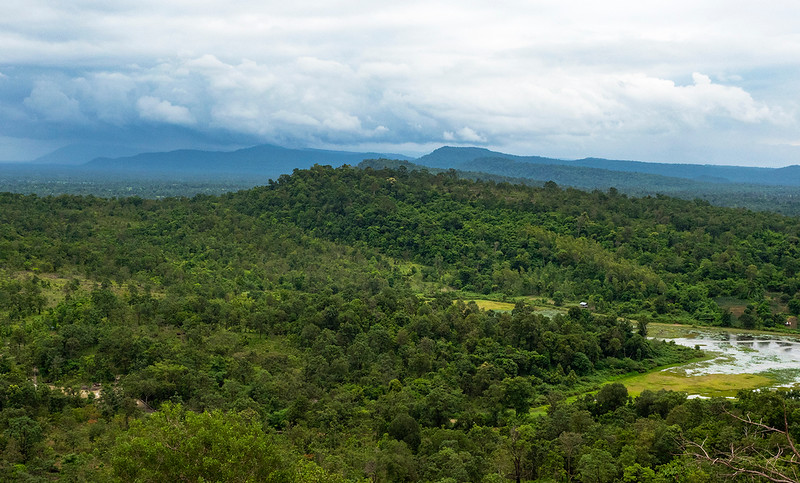 The view to the north. We walked around the grounds for a while, then headed north to the village to pick up Malida's niece, who wanted to stay overnight with us. The village is about an hour north of here. The road used to be terrible, with more potholes than actual road surface, but it has since been resurfaced and is a smooth ride. The government has done a lot of road work up this way, and almost everywhere we have driven has been good. 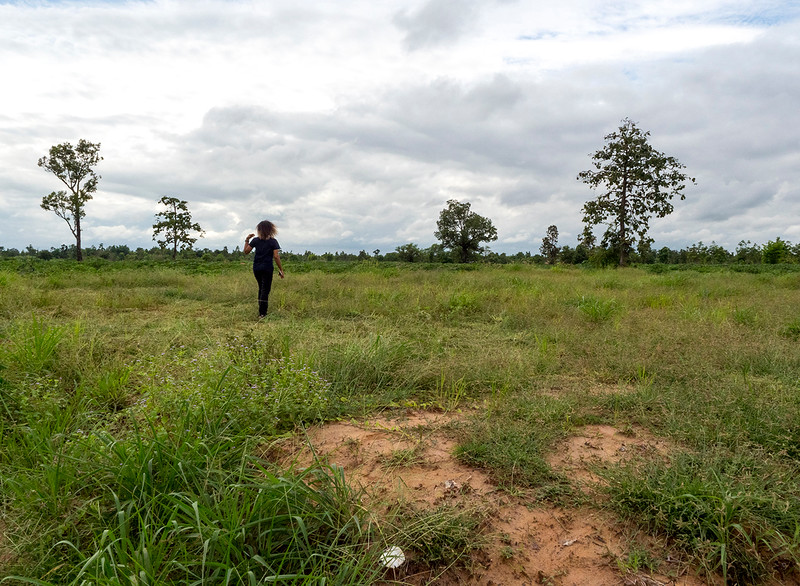 We walked down the road and met our neighbors whose land adjoins ours. They were very friendly, and had known Malida's dad when they were all growing up. They remembered Malida as a little girl. They farm rice and vegetables, and were very proud of what they had accomplished in the two years they had been out there.

In our culture, we might think of them as living in poverty, but here they have land, food, a motorcycle and sidecar to take what they grow to the market, and a roof over their heads for when it rains. They are good people, and asked me to learn Thai, so they can talk to me when I am here.

I have some big lump in the middle of my abdomen that I just noticed yesterday. I thought it might be a hernia, but now I am thinking it is a ruptured rectus abdominis muscle. Probably from lifting those 25 kg suitcases a million times to see how much they weighed. It doesn't hurt, but looks like some sort of alien trying to push its way out. I googled it, and it is fairly benign, so I won't stress about it unless something changes.
Collapse