We are staying a few days on an island in the middle of the Mekong in Laos. It is part of the 4000 Islands, in the southern part of the country. I am having a cup of coffee and looking across the river towards some mist-shrouded mountains in Cambodia. The river is wide and muddy, and there are small long-tailed boats going back and forth.

It took a couple hours to drive here, and we stopped at a waterfall along the way. Khonephapheng Waterfalls is one of the largest falls along the mekong. Malida and I visited it 11 years ago during the dry season, and it was impressive then. It is even more impressive in the rainy season. 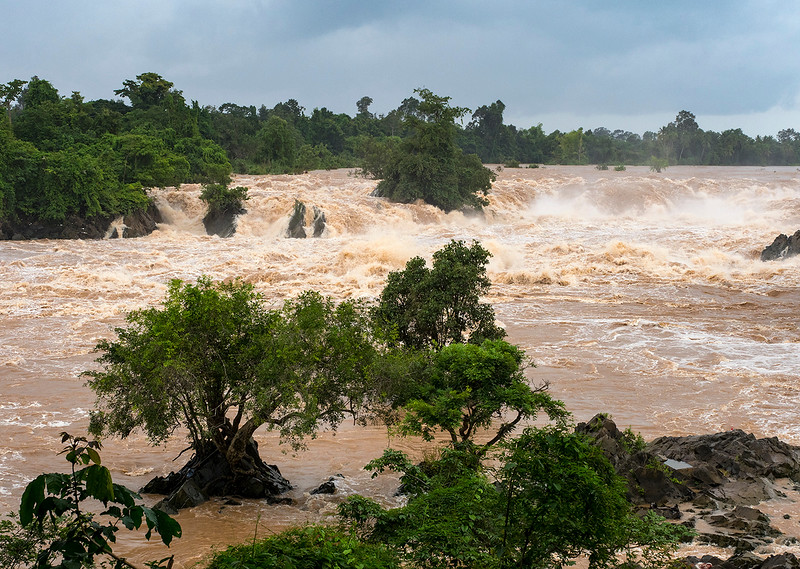 The picture shows about a third of its width. Since I slipped in the mud the other day, everyone was freaking out when I walked down the rocks to get a better look. I was careful. After the falls we drove back up the river about 10km to cross over to the island. It started raining as we were driving.

When we got to the dock, it was a fairly strong rain. We ducked under an overhang and our driver made arrangements for our boat. The long tail boats look kind of like canoes, with a long, pointed nose. They are propelled by an engine with a propellor at the end of a long shaft. They sit low in the water. By the time we climbed into the boat, it was pouring rain. I thought briefly about how waterproof my camera bag was, and hoped for the best.

The trip across only took about 10 minutes, and the water was relatively calm. As soon as we stepped off the boat, though, the rain intensified into a torrential downpour. We ducked under an overhang and waited it out. It lasted for about 15 minutes, then petered out.

We walked to our hotel and met the owner. He is some sort of French expat stoner, who seemed confused and distracted. He told us he forgot to renew his visa and had to go to Pakse. Don Det is kind of a stoner paradise. Marijuana, while not legal, is plentiful. One of the little restaurants nearby advertises "happy snacks", which are marijuana brownies, drizzled with chocolate sauce. Anyway the guy was able to clear his head enough to find our reservations. His wife, who is Lao, seems much more level-headed, and is probably the reason the business does well.

From left, Bella, Milly, Malida. Bella and Malida are easy to get pictures of, but Milly is somewhat elusive.

We walked down about a km, and had coffee at the Crazy Gecko. We were going to cross to the other side of the island, but it was starting to get dark, and it was looking like it was going to rain again, so we headed back up the way we came.

Mack and Malida wanted a massage, so they and Adi headed back up the road to the massage place, while I waited for them here and messed with my pictures on the covered patio along the river. The rain started again, and was even more intense than earlier--probably the hardest rain I have ever seen. There was thunder and lightning, and the wind was blowing. The people on the patio were kind of trapped, as it was raining too hard to leave. It was awesome. It kept up for a couple of hours. Malida and Mack got trapped at the massage place, and ran across the road to a bar and started drinking to wait out the storm. They were pretty happy by the time they got back at about 10.

Not sure what the program is for today, but I am confident it will include mud, rain, and Beer Lao

The view from here.
Collapse