I have about 25 minutes before we have to catch a boat back to the mainland, so a quick entry. Since we have been on the island, Adi has talked about wanting to see the Irrawaddy Dolphins, a handful of which inhabit the waters off the south island, near the Cambodian shore. Getting there would mean traversing this island, crossing the bridge, and going to the southern tip of the larger south island, via an almost impassible muddy road, about 12 km. Ok then. That's what we set out to do.

We piled into two tuk-tuks and headed south. This picture shows the general condition of the road for pretty much the entire trip. It was actually a lot of fun. Our driver had his little girl sitting in front of him, and she would scream with delight with every puddle we went through. Surprisingly, though there is a lot of water in the road, it isn't really muddy. The road itself is apparently an old railroad bed, for a train that used to run from the top of the north island to the bottom of the south one. 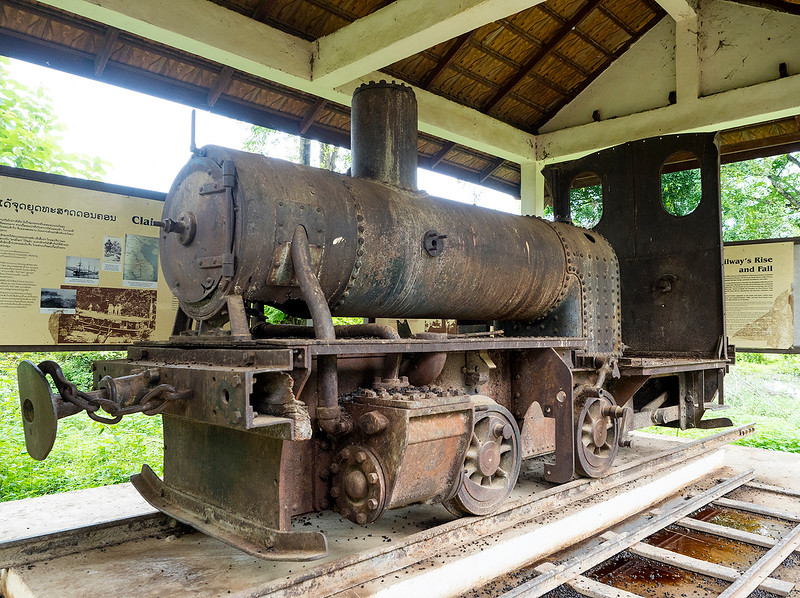 The railroad was built because of the waterfalls along this stretch of the Mekong, which prevented boats from passing, and was the only place along the river that wasn't navigable. So they laid some tracks and brought over two steam engines from France, and ported boats and supplies across the islands.

We made it to the south end of the island and hired a boat to take us out into the river, below the falls, to look for the dolphins.

Mack took this picture from above as we got ready to get on the boat. Is the boat as rickety and decrepit as it looks, you ask. Yes. It was all about the adventure, though, so we went for it. All except Mack and Bella, who waited for us on the shore.

We went out into the river and headed over near the Cambodian side. We were the only boat out there. I think there are only about three or four dolphins left here, and they are considered functionally extinct. They surface briefly, then dive down again, and we only really got a quick glimpse of them. Adi was delighted, though, and was able to cross this item off his bucket list.

I only got this shot of one of them, but I was pleased with it.

We came home and Malida and Mack shared a bottle of Point Reyes Vineyards wine by the river before we all went out to eat.

We were going to go back to Ubon today, but decided to head to the Champasak temple and stay over that way for another day.
Collapse