I was debating last night about whether or not I needed to go in to work today, or whether I could afford to hang out in the yard drinking coffee. I came to the somewhat shocking realization that summer break is over in two weeks, and the machine is about to start up again. I do have to go in--there's just too much to get done with this summer group before I have to start gearing up for the fall.

I came to a compromise with myself--I will sit out in the yard and drink coffee until about 9, then get ready and head in. It's going to be 100 here anyway, so I would be driven indoors eventually. But dang! Two weeks left. How did that happen?

Red sun. We are still having bad air, and the fires are still burning all over.

I got my lab tests back yesterday afternoon. My health system has a phone app that sends you messages about these kind of things. The labs look good. My A1C results are the same--hovering near prediabetes, but it hasn't gone up. My cholesterol remains remarkably good. My doctor added a note that we will discuss them at our appointment next week, when I see him about this abdominal lump that is still there.

I finished up with one hard drive yesterday, and plugged in one of the older ones--a 500 gb one from a ways back. I was surprised to see that the years 2003-2006, plus 2008, were all neatly categorized within. At some point, I must have gone through and put most of this stuff together. Makes it a lot easier.

The 2003 files start in mid-May, which was about the time I bought my first digital camera. I think there might be some stuff from April somewhere, but it's possible I just didn't save any of it. I still have some other drives to look through.

The thing that took me by surprise was that when I opened the first of the files from May 2003, was that they started on the day my first wife, Arlina, was diagnosed with terminal cancer. It still packs quite an emotional punch. I don't think I was prepared to have all that spill out in front of me, and pretty much let 2003 and 2004 be for the time being. I know what's there--it is a visual journey of her illness and eventual death in November 2004, as well as my attempts to escape that reality through photography.

I skipped forward to the middle of 2005, which was about the time I quit my job and started to travel--my ghost journey.

The only thing missing from this shot is my old iPod, which shows up in another picture all by itself on the map. that computer conked out on me about three days into the trip and I had to buy another one in Oregon. You can kind of see the outline of my starting up the west coast of the US, and into Canada. Once I got out of the Canadian Rockies, though, and into the prairie, I deviated from my plan and just followed secondary roads east, going wherever seemed interesting at the time.

One of the more interesting things I noted when I went through the files yesterday was that, the longer I was out on the road, the less pictures I took. I think that was partly to do with some discouragement over my lack of photography skills at the time, and partly due to my state of mind, which was pretty dark most of the time. You can't outrun grief. 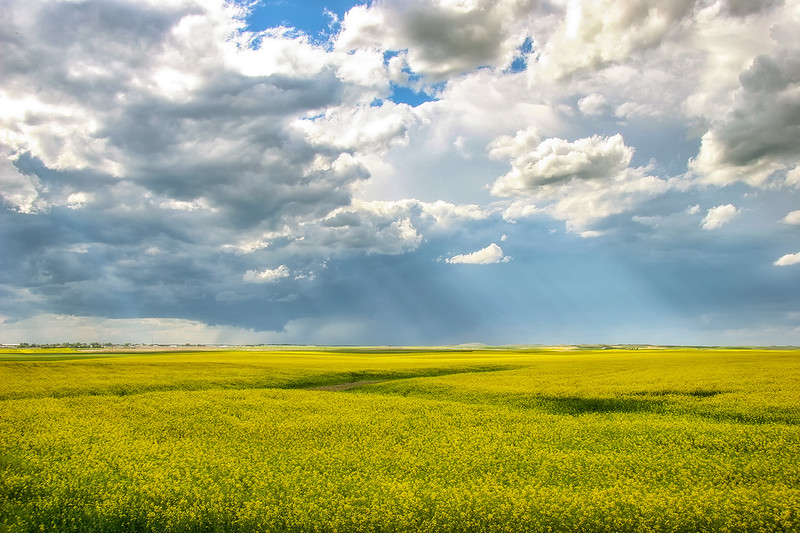 I would love to go back up that way again, and Malida and I have discussed a road trip for either next summer or the summer after. Between trips to Thailand, I guess.

That black cat just walked by,along the fence, and gave me the eye. The hummingbirds are back at it, chasing each other and chattering away. My coffee cup is empty, and it's time to go do the things I must do. Time goes by.
Collapse