Wednesday I had to renew my advanced cardiac life support certification. I've been certified since about the late 1980s. When I worked in ICU and in rapid response, I used it all the time, but I haven't been in a cardiac arrest situation in at least 5 years now. I don't really miss that. I keep renewing to keep up with the changes, so I can incorporate them into my teaching.

The training also counts toward the 100 continuing education hours I need to renew my Critical Care RN certification, which I'm not required to maintain either. I maintain that because, even though I teach now, I will always be a critical care nurse. It used to be that if you didn't do a minimum number of hours at the bedside, you couldn't keep your certification. They changed it a while back to reflect that a lot of old critical care nurses were now teaching, and doing things that support critical care nursing. So now my certification is CCRN-K. The K stands for knowledge.

Yesterday I had to attend a four-hour update on stuff at the clinical site where I take my students. Mostly it was about all the online stuff we have to complete before bringing students into the hospital, and the electronic health record. The great thing about the training was that it was done in less than two hours. I went back to the office and did a bunch of still I needed to do to get ready for the upcoming semester, which starts at the end of next week.

I walked to the other side of campus to get some lunch, and saw that they were cutting all the trees down around Mohr Hall, our old home. This is because they are supposed to be starting demolition of the old building next month, and starting on the new one.

These trees have been there since before Mohr was built. Back in WWII there were quonset huts here, where soldiers were billeted. After the war, it was the dormitories for the nursing students. During my time as a student, we would sit under the trees and study, shaded from the hot summer sun.

It's too bad they have to cut them down to make room for the new building. Assholes.

Malida called while I was at work and asked if I could stop in one of her favorite hole-in-the-wall Lao stores to get her some sticky rice and laab. It was on the way, so I did. As I was waiting for the food, I looked around, and was surprised to find Beer Lao in one of the refrigerators. They sell it there! I talked to the girl behind the counter, and she told me all about how they could never get it until they found someone in San Francisco who was importing it. They even have Beer Lao Dark, which is even better than Beer Lao. My life is complete. 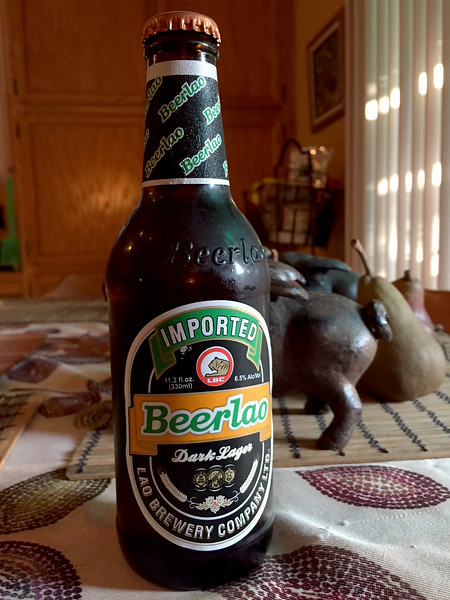 I was planning to go in to work today, but I have to start up again for real next week, so I rolled over and turned off the alarm. Now I am in my lovely back yard, and all is well.
Collapse