We had a nice weekend up over the hill on the eastern side of the Sierras. It's a bit of a drive--about 4 1/2 hours to get there, and a little more coming back (we took a different route), but worth it. We got to where we were going in the early afternoon, and took a hike around Convict lake. There were all sorts of people out there enjoying the lovely end-of-summer weather. There was even a wedding going on along the shore.

As the bride was getting ready to make her grand entrance, a baby threw up on her beautiful dress. The call went out among the bridesmaids, "Who has a moist towelette? Emergency! Emergency!" They all looked at each other, dumbfounded.

Fortunately, we had a pack of moist towelettes in our daypack, and handed them over, thus saving the day. I'm pretty sure they renamed the baby after me, though they didn't know my name.

We checked into our hotel in the late afternoon and then walked up to the diner to eat. We sat outside where they had tables on the grass. They brought out these huge plates of food, along with salads. We each had a beer, and that kind of did us in. We walked back to our room, fully intending to rest a bit and then go out to see the sunset on the lake, but fell asleep, and slept through until about 4 the next morning. Which worked out well, as we planned to go out and see the sunrise.

It was a lovely sunrise, and I got a few good shots. Mostly, I scoped it out for when I am back up there in a few weeks with my class. I know where I want to be when the sun rises.

After the sunrise, we went back to our room and had our leftovers from the night before for breakfast. It filled us up, and fortified us for the day. We checked out and headed up the road a piece to the town of Bodie, which is a former mining town, now a ghost town.

It's a pretty cool place. There are about 100 buildings still standing, as well as a bunch of abandoned cars and stuff. I spent most of my time looking in the windows of the houses to see what was left. 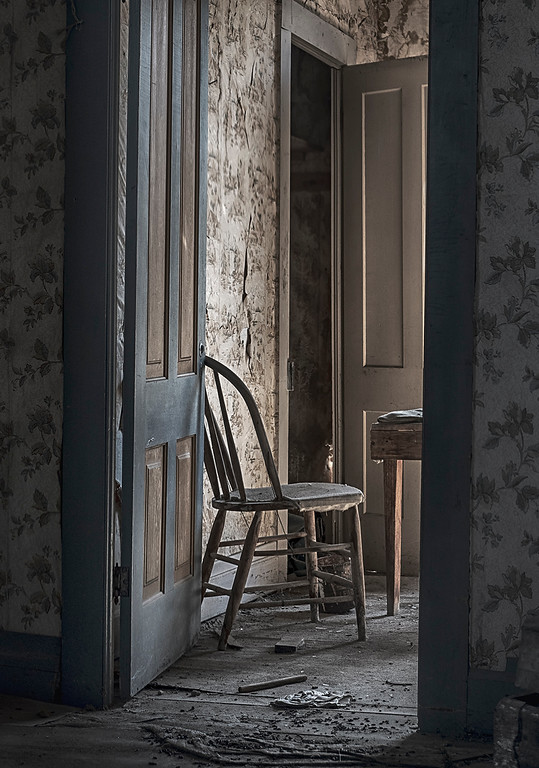 It has a kind of lonely feeling to it. I think when I am up there in a few weeks, I am going to concentrate on what's in these buildings and use that for my portfolio.

We got out of there after it started getting hot and lots of people started showing up. We drove over to the town of Bridgeport, which is on the eastern side of the Sonora Pass, intending to get an ice cream, but finding a Founder's Day celebration in the little park in front of the old court house. So we spent an hour eating hot dogs and Philly cheesesteaks, and visiting with the local people, who were extraordinary friendly.

Malida with CHP officer Elena Villa, who told her some ghost stories about Bodie. That's Vic in the background, photobombing. Vic is a local photographer.

There was another guy there selling photo prints that his daughter took. She was an aspiring photographer who had just gotten her first photography job in Austin, when she was killed by a drunk driver. She was only 24 years old. He sells the prints to keep her memory alive, and donates the proceeds to the Bodie Foundation, which maintains and restores the Bodie ghost town. We bought one and will put it up at home.

We took the Sonora Pass route back over the Sierras. We drove through an area where one of the big fires had recently burned--the Donnell Fire. We saw that one of the places where we had stopped for ice cream the last time we were up that way had burned to the ground.

We got home in the late afternoon and crashed out. It was a great weekend.
Collapse