It was a nice day. I went in to work at about 6 am and was the only one there for most of the day. My boss came over a few times to chat about stuff, and I walked over to her office once to go over some stuff we are working on, but other than that, I had the day to myself. I made a new list of things I need to do in the next couple of weeks, before I leave for San Diego for a conference. I worked on the stuff my boss needed me to work on. I had a big salad for lunch. 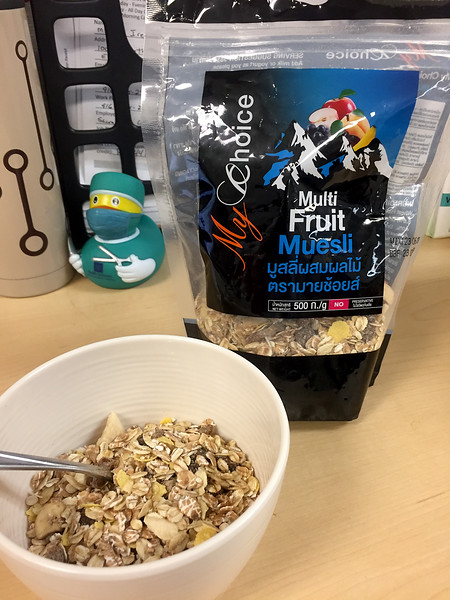 I finished up the last of the muesli I brought back from Thailand. It's not the muesli her cousin brought me direct from Germany--it's stuff they sell in the big market in Malida's home town. They have a lot of stuff from Europe, and I always buy muesli before I come home. I can't find good European muesli here. The next time I'm there I'm filling up a suitcase with muesli and Lao coffee.

I picked up the prints I made yesterday. Surprisingly, the new Costco doesn't have a photo center, so I had to go to the old Costco, which was less crowded than I have ever seen it. The photo center guy told me they are phasing out the photo centers. Too bad--they do a pretty good job.

The prints turned out ok. The best of the rock prints was the one that I posted first--the sepia-toned one that looks like an alligator. But the best overall print was one that I didn't even include in the portfolio or post here. It's of the tufas at sunrise. I think it looks better as a print than it looks on the computer screen.

I ran it through all sorts of filters to see what I could come up with, and this is what I ended up with. I made an 8x12 print, but will make a bigger one and hang it somewhere. I keep saying that, but I have all sorts of photographsI have printed, still stacked up on the dining room table.

Yesterday was my dad's 89th birthday. I called him and we talked for a bit. We will see him on Sunday when we all meet up for his birthday lunch at the Fish Market. As I was falling asleep last night, I reflected that he is now older than his father was, when he died at age 88. If I live to be 89, I hope I am still taking pictures. Or whatever it is people are doing then.

I'm trying to think of something to get my dad for his birthday. His house is full of stuff he has collected from his trips all over the world, he likes to wear his old clothes, has a stack of gift cards an inch high sitting on his counter, and doesn't eat candy. Any suggestions?
Collapse