So it's been kind of stressful lately, though the self-doubt I encountered last week pretty much disappeared after a day or so. There's a lot going on at work, with all sorts of looming deadlines. And preceptorships, which are always a pain in the butt. And cats.

After I made dinner last night, I decided to open the door a bit to let in some air. As soon as I started to open it, one of our indoor cats, Chocko, took off between my legs and out the door, chasing that pesky black cat that is always hanging around. They tussled for a second, then both took off across the yard and over the fence, and disappeared.

Chocko has never really been outside other than once or twice nosing around outside the door, so I was pretty worried. I walked up and down the neighborhood looking for her. I talked to all the neighbors and asked them to keep an eye out. Malida came home and we went out again together looking for her.

Once we got back, I sat out in the back yard in case she came back. After about 45 minutes, I saw Gemma, the other friendly neighbor cat, walking along the fence. Chocko was following her. We got Chocko inside again, and she looked fine. I was kind of fascinated by the idea that Gemma would bring Chocko home.

I took a look at my now-cold dinner and threw it in the trash.

The photo department here at school is having a photography contest for students, and I am entering some pictures. A few from the last class, and a few from earlier. The grand prize is a pretty nice Canon camera. 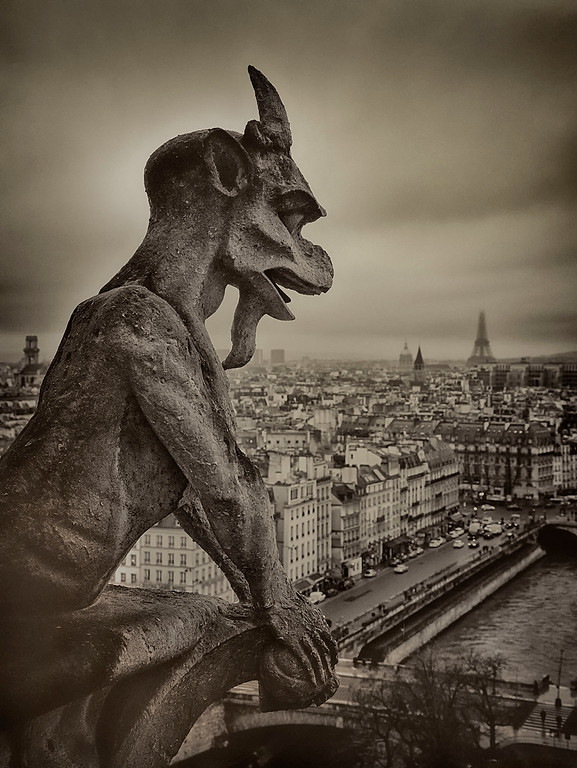 I found one that I made when I was in Paris about 4 years ago, and fooled with it a bit. It was taken on a rainy day up on the top of Notre Dame, looking out over Paris. It was way cool to be up there, even with the rain. I think it's a winner. Maybe.

We are going up to the mountains for the weekend, to take in the fall colors. It's good that we will be out doing stuff, because otherwise I would just sit around and stress about the work stuff that needs to be done, but probably not doing anything constructive about it. I know myself. Next week I am in San Diego for three or four days for an education conference. I'm looking forward to that, and to seeing my niece Candyd, who lives down there.