So things are settling down after the holiday and the week plus off from work, and now it is back to the routine for a few weeks before winter break starts. I very much enjoyed this unexpected time off, and it was long enough that I started to get into winter break mode, meaning I'm not ready to go back to work. I did manage to keep up with stuff, so I won't be overwhelmed when I start back tomorrow, but I will be busy until the end.

Our Thanksgiving dinner went well. We had 9 people, and I made all sorts of stuff:
Turkey, prime rib, mashed potatoes, stuffing, yams, green bean casserole, roasted Brussels sprouts, buttermilk yeast rolls, homemade cranberry sauce, and gravy. I was pretty worn out by cooking, but everyone enjoyed it. I forgot to take pictures.

I made a bunch of stuff differently this year than in previous years. I spatchcocked the turkey, which worked really well, and I will do it again next year. I cooked the prime rib in the air fryer. I cooked the stuffing in a slow cooker, and did the potatoes in the instant pot. I tried to use all those things at once, and blew the circuit.

We went for a walk in the late morning. It was a beautiful day after the rains. The air was clear, finally, and everything smelled good. The trail was flooded in a place where it isn't usually flooded, so we turned back. It has rained on and off since then, and the fires up here have mostly been contained.

Friday, we went to see Fleetwood Mac. I had not thought about going, but my friends invited me, and paid my way for my upcoming birthday. I reciprocated by paying for the Uber rides to and from the venue. The show was great. I missed Lindsey Buckingham--he was kind of the heart of the band, but Mike Campbell is a better guitarist. I've been to some concerts by bands that have been around for a while who just phone it in, but Fleetwood Mac was there to play. 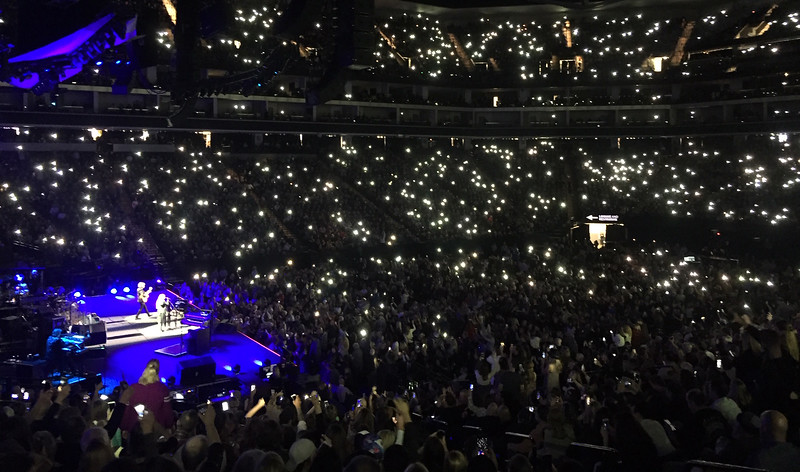 Our seats were off to the side of the stage, which offered an interesting perspective on both the band and the crowd.

Yesterday was kind of a lazy day. I brought the ladder in and changed all the burnt out light bulbs that are way up in the ceiling. I cleaned the kitchen. That's about it. I will work on some accreditation stuff this afternoon, and back to work tomorrow.

and so it goes.
Collapse