The subject line was from a year ago, but I was thinking about lonesome train whistles this morning after I read something someone wrote about them. I had meant to write back that the sound of a train whistle is both lonesome and comforting, but I think I was distracted, and now don't remember where I read it. Maybe here. In any case, I was kind of surprised to see it auto-fill in my subject line from last year. Or maybe even some other January 3rd.

I've almost always lived close to the train tracks and heard trains going by. There are tracks running through the field out back of our neighborhood--these are the same trains I see when I am walking my beloved creek trail. When I am at home, and they go by, I don't really notice them, though I am aware they are there. It becomes part of the normal soundscape. When I am out on the trail, I listen for them, and can now tell the difference between an Amtrak train and a freight train.

One of my favorite trips was when I took my grandmother to El Paso by train. I was a smoker then, and would head to the area between the cars where there was a window, to smoke and look out at the nothingness of the Arizona desert passing by in the darkness. The would blow the whistle as we passed through the towns, and it was such a lonely sound. Maybe one of the loneliest sounds in the world. I'd like to take that trip again one day.

I went into work and did a bunch of stuff and looked at the big pile of accreditation papers sitting there. I took a walk around the mostly deserted campus. It was cold out--maybe 40 degrees or so, but the sun was out, and it was a pretty day.

The construction site where our new building will go. The have torn down most of Mohr hall, and hauled away the debris. They are now in the "push dirt around with big tractors" phase. If I were a construction worker, I would like to have the job of pushing dirt around with a tractor. It seems like it would be satisfying. 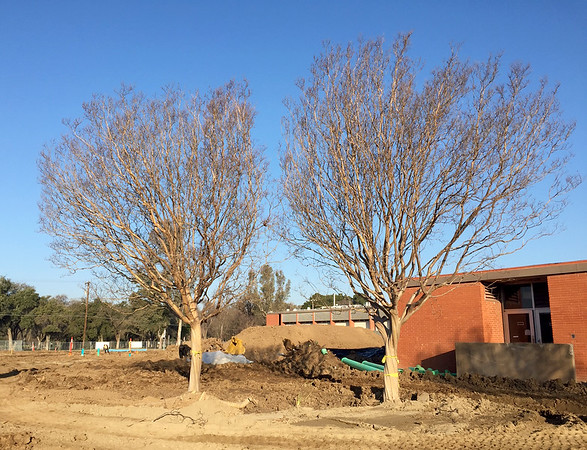 A couple of crepe myrtle trees that survived the purge. You can see the remains of the east side of Mohr Hall to the right. They had to keep this piece of it up because all the utilities for the building across from it go through here, and they couldn't separate them out for the other building. Or something like that.

I thought about making prints of some of my photographs to sell. I sent a few photo files off to a place in Chicago, where they have a pretty cool way of printing and mounting them. I sent three, with three different processes, to see what they look like. I'll know in about 3-4 weeks.

I was encouraged by seeing so many women, and so many women of diversity, sworn into the Congress today. It was a cool breeze in the midst of what feels like an oppressively hot summer, politics-wise.
Collapse