We just got home from eating Korea BBQ at our favorite Korea BBQ place. It was delicious as always, and now we are somewhat logy. Malida is on the couch watching her Korea soap opera, and I am here, doing this.

It is windy and rainy this afternoon, so it's good to be back inside where it's warm and dry. We can always use the rain. I have a nice hot cup of tea in front of me. 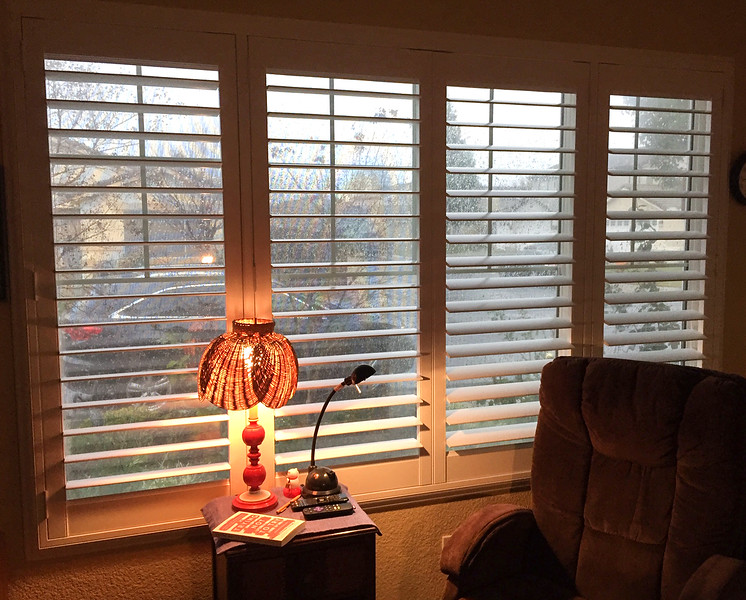 Here is the same window you couldn't see in the picture you couldn't see yesterday, with its new shutters. They are wonderful. I can open them up and let the light in, or close them and sit in the dark. Overall it is somewhat darker than yesterday's picture because I also have some screening on the window out front to cut the summer sunlight a bit.

That lamp with the wicker shade--I bought it for a dollar at a garage sale back in the mid 1980s, right after I moved out of the halfway house. It's getting kind of fussy these days--you have to tap it a few times for the light to come on. I should get a new one, I guess, but it has sentimental value. I've had that small black reading lamp for about 20 years, since I moved into this house.

The lamps in my living room (not shown here) are probably at least 60 years old. They came from my grandpa's house. Why get new lamps when the old ones still work? That being said, I am perusing a catalog of new lamps.

The other thing that is different in the picture above is that my desk is no longer next to the window. I had to move it to the opposite side of the room so the shutter guy could put the shutters in. I decided to leave it this way for the time being. Now I have my chair there, and can read by the window.

Here's what it looks like over on the other side, where my desk now sits. Those pictures above the desk are going to come down pretty soon, and I am going to start putting up some of the more recent stuff I have photographed. I like these, though, and will probably put them up somewhere else.

The boy in the picture to the left was my guide when I visited Ta Prohm temple in Cambodia. He was probably about 12, and charged a dollar. The girl in the middle was in a village in the mountains of Vietnam, outside a town called Sapa. And the girl on the right was at Angkor Wat. It is probably one of my favorite shots. She looks so sad with those big eyes. She was actually kind of upset--her sisters were selling postcards, and they wouldn't let her stand with them, so she sat under a tree and looked miserable.

So there you have it. An incomplete tour of my office.
Collapse