You were right about the comet.

I was supposed to be in the skills lab with my students today, but we are still working on that accreditation report, and my two colleagues graciously released me so I could continue editing. I kind of feel disconnected from my clinical group, though that will change next week when we are at the hospital.

I was finalizing the accreditation document this morning after we put all the different sections together. It needed some formatting and some tweaking so that everything kind of sounds like the same voice. Overall it looks pretty good.

I was pretty much done, and was going over the appendices with one of the other authors. I commented to her that there was an appendix for a section that didn't seem to exist. Turns out there were about 35 pages of her content left out of the final document. Yikes!

We found the pages fairly quickly, and I spent the balance of the morning getting them to look like the rest of the document. We keep being almost there, but not quite. I'll go in early tomorrow to finish it off, and we will do a final read-through before we send it off. As I have mentioned previously, I will be happy to see this done and gone, but it has been a great experience.

When I got home, there was a box on the front porch with the photos I had sent for printing last week. They look great, and the cost is a lot less than the other place. I think I will use these guys in the future. I tried a bunch of different print types, and liked all but one.

I'm not sure it is so much the process as it is the photo itself. I think I want it to be better than it actually is. No matter how I print it, it's still not going to be how I see it in my mind. I'll hang it up in my office to remind me of that. 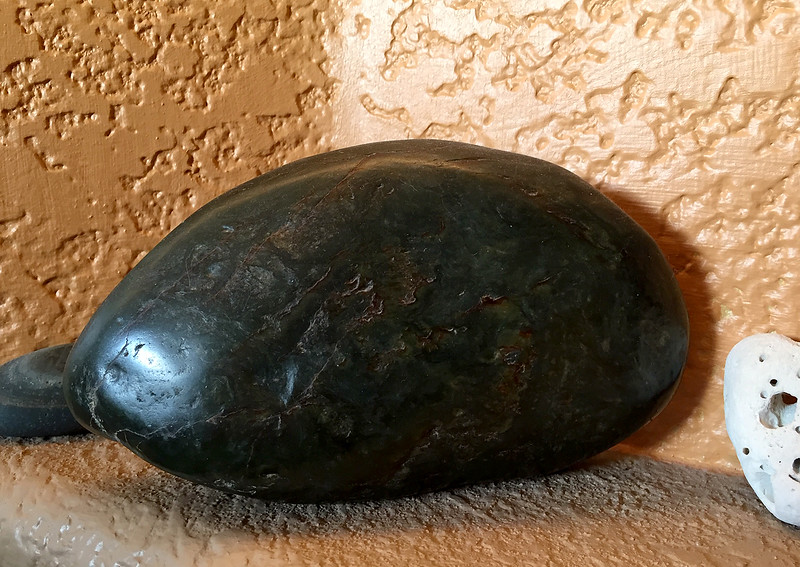 A hunk of Big Sur jade that sits on my mantel next to a couple of lesser rocks.

I've had this since 1990. I was driving down the coast highway, and stopped in Big Sur for a cup of coffee. They were having a festival, and selling raffle tickets to benefit the diver rescue guys. I bought a ticket and thought nothing more about it.

A few weeks later, a box arrived with this stone. I had won first prize! I wasn't sure what to do with it, so I put it above the fireplace. When I moved, it moved to the new mantle above the fireplace, and there it has sat. It is somewhat bigger than my hand, and weighs three pounds. I like it.

I could have done a better job with the picture--maybe a neutral background or something, but I'm kind of beat. I missed my nap.
Collapse