Today is my grandma's birthday. If she were still alive, she would be 111, which would be well beyond what she had hoped for. She died at age 93, believing she had made it to 100. She was happy.

February was the month for birthdays on that side of the family. My grandpa's birthday was February 14, and my mom fell right in between on February 10. One of my students took care of a patient today who was born on February 10.

We have some confused onions that decided to sprout in a big way, and Malida decided to decorate the house with them. I think she gets bored on her days off when I am not around.

I received a couple of pieces of disconcerting news the other day. The first was that there was some sort of issue with one of our tutors, which would require some attention, and the other was that someone I care about was experiencing a scary health issue. This was on Tuesday, and when I went in to work on Wednesday, my plan was to keep my head down and get out of there as soon as I could, because I just didn't want to deal with stuff and I was fretting about my friend.

Of course that didn't work out and I ended up dealing with all sorts of stuff. We have had an issue with water pooling outside our classroom after it rains, and then freezing when it gets cold, and I have called about it a number of times, including on Tuesday, when I almost slipped. I put up a sign warning people. But no one came to do anything about it. My colleague called again while I was teaching.

It was icy on Wednesday as well, and my colleague got on the phone again to see why nothing had been done to mitigate this hazard. As she was talking to operations, someone brought one of our students in who had slipped in the ice and hit her head. Shit.

I took her over to the health center, which was not yet open, so we went over to see my boss, who sent her to the ER. She's fine, but kind of shaken up.

I was so pissed at the college operations center, which is supposed to take care of this kind of stuff, and doesn't. I complained about this same issue last year, and nothing was done. The nursing department gets treated like shit there.

I wanted to write a flaming arrow letter to the dean after it happened, but decided I better cool off first. I beat a retreat to the hospital to watch my students find patients to take care of. I came back from clinical this afternoon and all the walkways are festooned with caution tape and signs exhorting students to be careful--"May be slippery".

Anyway, being away from the campus did wonders for my mood. I'm still fretting about my friend, though. If you have some healing thoughts to spare, please direct them her way. 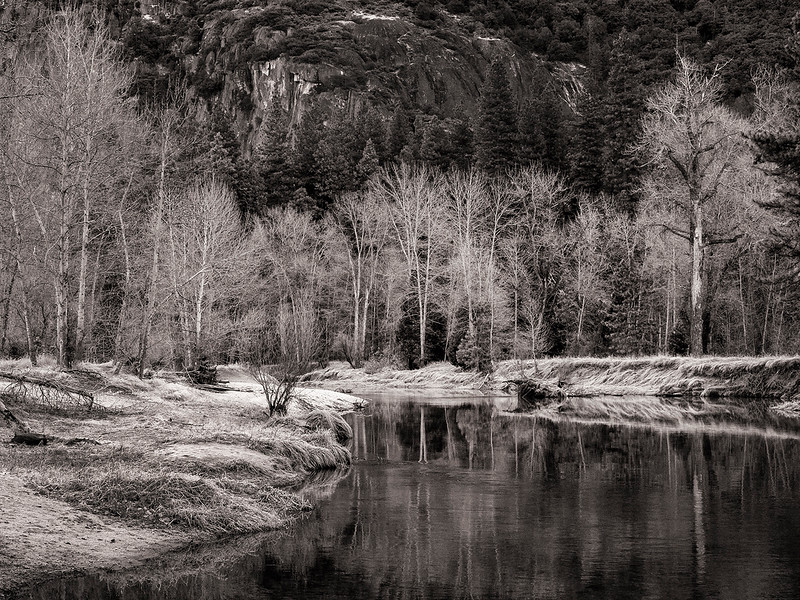 Here is another shot from our trip to Yosemite last month. In black and white, which is really just infinite shades of gray, much like life.
Collapse